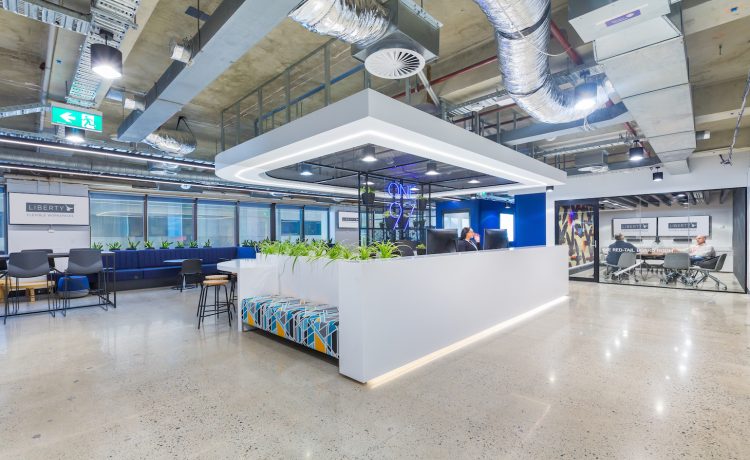 As we all know, COVID-19 has significantly disrupted the traditional office work environment. More and more staff are working from home and have flexible working arrangements, including using co-working spaces.

Liberty, a Perth business founded in 2010, is taking advantage of this situation by consolidating its CBD offering into a flagship facility alongside launching a new location in West Perth.

Level 12 of 197 St Georges Terrace has been added to the CBD Liberty suite of spaces. This has increased its total footprint in the building to just under 3000 square metres. The facility is already 87% occupied and features state-of-the-art video to technology to facilitate a variety of online and virtual meetings.

For their West Perth offering, a new 600 square meeting location has been launched at 35 Outram Street.

Both spaces benefit from communal lounges, contemporary interior design, informal meeting areas and artwork that have been exclusively commissioned by Liberty itself.

James Vine, who calls himself the ‘Chief Liberator’ at Liberty, believes the pandemic has highlighted issues with long term leasing strategies for many organisations.

“The COVID-19 pandemic has accelerated the rate of change in how people work. The temporary ‘work from home’ measures taken during the worst of the pandemic are being translated into reconsidered real estate strategies with a focus on agility….long-term leases tie up a lot of capital and put handcuffs on an organisation’s ability to upsize or downsize. We focus on delivering a more accommodating solution with more emphasis on service than our rivals,” said James.

“I anticipate corporate organisations will reduce their exposure to long leases and reduce their footprint as soon as they are able. I expect businesses to allow more people to work flexibly which could mean continuing to allow some working from home (WFH) and partnering with flexible workspace providers like Liberty to facilitate more collaborative tasks.”

Another part of Liberty’s strategy is using a client experience team (known as the ‘Liberators’) who position themselves as an extension of their client’s team.

“We continually consider how we can better serve our clients and prospective clients. Businesses do not want to be left behind in terms of services, interior design, and the added value that flexible workspaces provide for productivity, as well as recruitment and retention,” said James.

It isn’t just the CBD where Liberty plans to expand their Perth operations.

Liberty has recently announced new target locations in high-growth areas such as Joondalup, Mount Pleasant, Fremantle and Cockburn in addition to exploring further options in the western suburbs.

With co-working plans just starting from $13.50 per day there are a variety of options for those wishing to take advantage of Liberty’s co-working and serviced office offering.

View all posts by Liam Wignell →
Liam is a Curtin Business School graduate with extensive experience in retail supervising, procurement, marketing, research, application and grant writing across a variety of industries. Liam hopes to promote the amazing work many local startups and SMEs in WA are doing by contributing to Startup News.