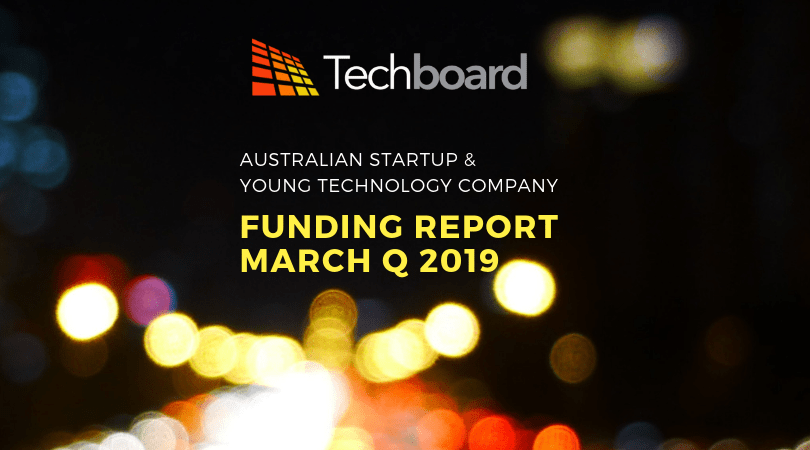 Techboard’s quarterly early stage funding report is out, and although it was the largest quarter on record, that was mainly down to one huge eastern states deal. Overall, funding is slowing…

When you consider that only 0.3% of the total $9.4B invested into all WA companies went to early stage tech companies in 2018, the local startup community has been used to ‘doing it tough’ when it comes to securing funding of late.

Sadly, the story is not showing signs of improvement in 2019, if the latest quarterly funding report from our friends at Techboard is representative.

The report identified over 150 nationwide funding events during the first 3 months of the new calendar year, 17 of which were in WA.

The headline figure of $2.7B across the country was a record since Techboard have been plotting early stage capital raisings. However, the total was boosted by the sale of PEXA for $1.6B and a $141M series C raise for fintech Airwallex.

This latter deal welcomed the Melbourne based private company to the ‘Unicorn Club’ valuing them at over US$1B. The only other Aussie member of that exclusive club is Perth-founded (and Sydney-based) Canva.

Over here in WA, the situation was rather subdued by comparison. Although the quarter saw $20.6M in private capital raisings, $20M of this was secured by one company – Respiron Pharmaceuticals – so the rest of the pickings were mighty slim indeed.

Even public (ASX) raisings to WA early stage tech slowed, with only seven placements for the period, the largest of which went to Fastbrick Robotics ($17M), MyFiziq ($6M) and Aurora Labs ($5M).

ICOs and crypto fund raising dried up with no recorded activity in WA.

Agtech startup Laconik secured a $382K Accelerating Commercialisation grant during the period, as well as matched funding from a Singaporean VC firm.

NOTE: These statistics are based on reported deals only.

You can read more on the Techboard site. Images Supplied.