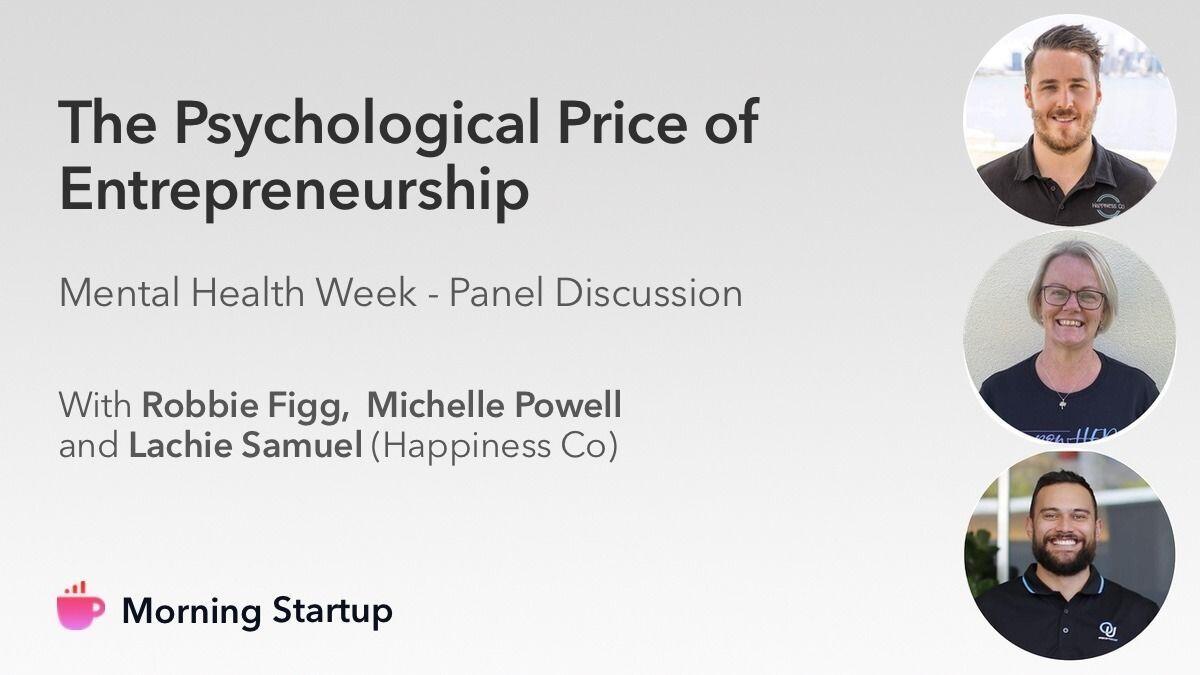 Did you know that 49% of entrepreneurs suffer from at least one form of mental health condition during their lifetimes?

As part of Mental Health Week, Morning Startup is hosting a panel discussion with the fantastic people at Happiness Co to destigmatise mental health issues plaguing startup founders and discuss the resources and support available to us.

Even if you’re in the 51% of entrepreneurs lucky enough not to be faced with mental struggles, please come along and hear the stories and make it known that you’re available to support other entrepreneurs achieve psychological success in addition to the traditional financial or growth-driven success metrics that we tend to prioritise.

Having spent 10+ years in workshop facilitation for kids as, Robbie moved on to big kids, joining Happiness Co as General Manager. Since then, Robbie and the team at Happiness Co have won numerous awards, including national wellbeing initiative of the year, which has lead to work with top tier mining companies, as well as elite sporting organisations all over the world.

Robbie brings a sense of fun and light-heartedness, to a topic and conversation that is generally not so.

Michelle has a Diploma in Counselling, NLP, Hypnotherapy, Dru Yoga, Meditation and a Degree in Business Administration.

She started her own personal wellbeing journey in 2010 when she was at the lowest point in her life. After years of abuse, Michelle was completely broken, slowly she pieced her life back together, even though her heart ached for her children she knew she needed to find her very best self in the turmoil. She looked at so many different ways to discover what her heart desired and began following anything she felt a passion for. Yoga and meditation helped her look within and she graduated with a Diploma in Dru Yoga in 2015. Still, she was driven to keep striving to be better each day, with a desire to impact people’s lives she authored her book “Freedom of A Warrior Princess” but felt too ashamed of what she had been through to publish. Through her work in Happiness Co programs, Michelle became an Ambassador, stepped into the role of Lead Ambassador and had a passion to serve, part of that was being vulnerable, releasing the shame and having her book published in March 2019.

Lachie is the host of the Open Up Podcast, which he first started recording as a suicidal FIFO worker in his donga and has become a Top10 mental health podcast host. Since then, Lachie has created the FIFO Mental Health Summit and partnered with Happiness Co, to co-create FIFO Happiness.

Lachie’s passion is in helping and empowering those working away, struggling like he was.

Thanks to Ammo Marketing (ammo.marketing), Beacham Group (beachamgroup.com) and AWS (aws.amazon.com) for your support of Morning Startup and the Perth startup community! If you need help with marketing and growth, hiring awesome people or building and scaling your application check them out and tell them Morning Startup sent you!