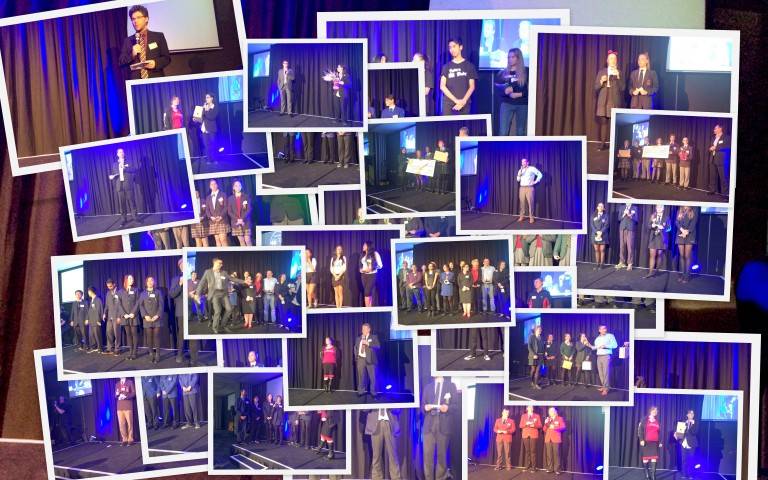 The Curtin University “Just Start It” entrepreneur school program came to an exciting conclusion when it held its gala awards presentation event on Monday 30th June 2014.

Just Start IT is an eighteen week program created by Lainey Weiser and Matt Pontel that has been taken into high schools to teach students how to create a Start Up or an App. The program is based on the Lean Canvas Method that most Start Ups use as a business plan.

Matt & Lainey explained that the only way to get students to understand the dynamic duo of Technology and Business was to get them creating their own Start Ups. Lainey explained that a Start Up is a business created to fix an existing problem. All teams involved were taken through the paces of the program from idea creation, to idea validation, to the creation of the business plan, creation of website and app, to costing, monetisation and go to market strategy. One to two teams from the eleven schools competing made it through to the gala night’s pitch event.

The initial launch event in February and this final gala event was sponsored by John Ross of Old Masters, Young Guns and Bankwest. Held in the Bankwest Place Mezzanine Conference Rooms, the preparation for the event was flawless, the food delivered, the music played, there were giggles of anticipation everywhere.

Some students had arrived 30 minutes early wanting to acclimatise.  They even snuck into the unattended pitch room just to test their nerves.

In the foyer the Photo Art Students from St Brigids exhibited beautiful photo art straight from their hearts, and low tones poured out from the Hamilton Senior High School pop Band.

Then it was time.  Everyone was ushered inside.  Capacity was reached. Let the show begin.

The event was MC’d by Julie Rougier-Lagane and Ian Odlum, both Business Analysts at Bankwest, who began the night with some well rehearsed debate over who was going first. Very entertaining.

The night was opened with Taryn Gootkins’ awesome rendition of “Say Something” by Christina Aguilera. We also got another song from Taryn later in the night, the crowd pleaser “Hero” by Mariah Carey. Taryn is a 16-year old aspiring singer/songwriter and has performed at Telethon, Breast Cancer Awareness and The Ellington Jazz Club.

After Taryn, we had a quick introductory speech from Peter Dell – Head of School of Information Systems, welcoming everyone along.

Next, Tony Simpson MLA was up to officially begin the night, expressing his delight in supporting young people doing something good for a change and not just getting into mischief at Schoolies Week.

Then we were into the pitches, where each school team presented their idea, market, costs, revenues, solution etc. They had five minutes to cover all the aspects of their business and there was an awesome range of ideas and challenges presented.  The students had obviously put in a lot of hard work and their  levels of maturity certainly showed with the way they handled remembering their lines, talking in front of hundreds of people, and selling their ideas to the judges.

After the five minute pitch, the Judges were allowed one question, and they used it to grill each team on its week points.

The sponsoring / judging panel was made up of some serious hitters;

Finally, after 16 pitches, school videos, singing and talks, the judges were ready to announce their choice. We were all quite ready to hear the winners by this time, after sitting through all those mind boggling pitches.

The first of the category winners were presented as follows;

Then finally we had the news we were all waiting for, the winner of the Bankwest Curtin Just Start IT Start Up Idea of 2014(suck in air after such a mouthful);

Penny Pledging –  an app all about helping teens save money toward their goals, while getting friends and family to pledge towards those goals.

This team from Irene McCormack (Sarah Ayres; Cohen Dennis; Jessica Jacob; Tyler Walsh; Ryan Delaney; and Ciaran Engelbrecht) and mentored by Steve Weiser were prepared, well researched, entertaining and above all have an idea with serious legs.

It’ll be interesting to see who offers them a partnership in the near future – we certainly heard some rumblings about it!

Craig Spencer from Bankwest presented the winning team Penny Pledging with a trophy and $5000, plus software from Microsoft!

Also, boxes of software were awarded to every winning team by Michelle Sandford from Microsoft.

The winning teams were overwhelmed. There were quite a few shrieks, and plenty of hugging.

After all the applause for the kids, it was time to thank the mentors;

Every sponsor involved, gave mentors, prizes, and love to this program, making it possible to grow wings.

These were the passionate bunch who gave hours of time to the students to get them to where they got.

At the end of the night, there was only one feeling in the room from mentors, schools, sponsors and industry – “Just Start It has only just started, bring on 2015!”