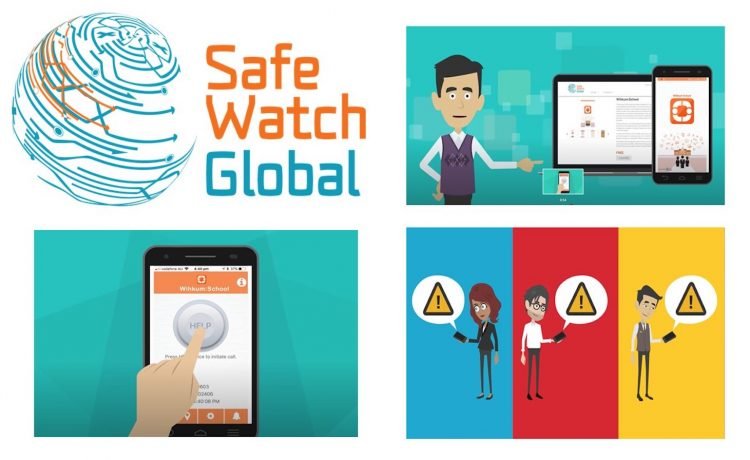 Developed in Perth by Safe Watch Global, the Wihkum:School app is specifically designed to tackle school violence, attacks on teachers, medical emergencies and intruder lockdowns in schools and TAFEs.

Founders and Directors Paul Bransby and Michael Zurzolo originally developed the app to help deal with rising levels of threat and violence in schools, but have now expanded its capabilities to deal with multiple emergency situations.

The app is a first in Australian schools and differs from standard security alert systems with its one-touch alert system automatically alerting appropriately trained, select staff for rapid alert assistance complete with satellite imaging to pinpoint where help is required.

Paul Bransby said the app offered schools peace of mind, protection and compliance coverage on a number of fronts – tackling school violence for staff and students and medical and other emergencies.

“Last year we had a case at a large high school where a lone teacher was confronted with a big fight on the school oval,” Paul said.

“The situation was volatile but with one touch the teacher was able to call ten other trained staff … help arrived quickly, and [they] were able to put a stop to things and disperse the students. That’s the difference … situations are defused before they escalate.”

Paul said tackling the increasing costs of violence against teachers and other students along with the desire to protect their wives, who are also teachers, was a big motivator for both app developers.

“For every teacher attacked in a school, the capital costs incurred to the State in insurance is in the tens of thousands of dollars. However, the human costs are much higher in psychological damage, time off, staff cover for the teacher and the ongoing impacts on the student,” he said.

Some teachers leave the profession altogether.

Some schools have used the app as a compliance measure to help keep staff and students safe in a variety of situations, including allergy related anaphylaxis. In one case, a principal used it for evacuation alert capability to deal with ongoing bushfire threats.

Michael Zurzolo said that in addition to the satellite imaging pinpointing location, Wihkum:School showed which staff were responding in real time, while also connecting the phone to the school office.

“We’ve designed the app so that even off school grounds, on an excursion, a camp, sporting or other event, it will alert the school and also the nearest trained staff – even if they aren’t from that school,” he said.

The founders’ aim was to build a peer-network of teachers helping one another and over the last two years they have encouraged school staff and principals to offer suggestions for future development – which most took up.

“In fact, our last six upgrades are a direct result of feedback from active users, with schools helping to build the app based on their daily experiences, and this is what makes our app different from others,” said Michael.

He also said the relatively small cost of the app, which was scaled to the amount of networked staff, represented a modest expense starting at $60 per month for up to 20 staff.

Safe Watch Global is currently approaching State and Federal Governments about funding any necessary trials of Wihkum:School ahead of potentially more widespread use in schools. They also intend to speak with insurance agencies.

“All schools should be able to access the peace of mind and protection that Wihkum:School helps provide, and we hope that Governments across Australia can allocate funds for that,” Mr Bransby said.

Safe Watch Global has been invited to present Wihkum:School virtually in the UK in September as part of London Tech Week 2020.