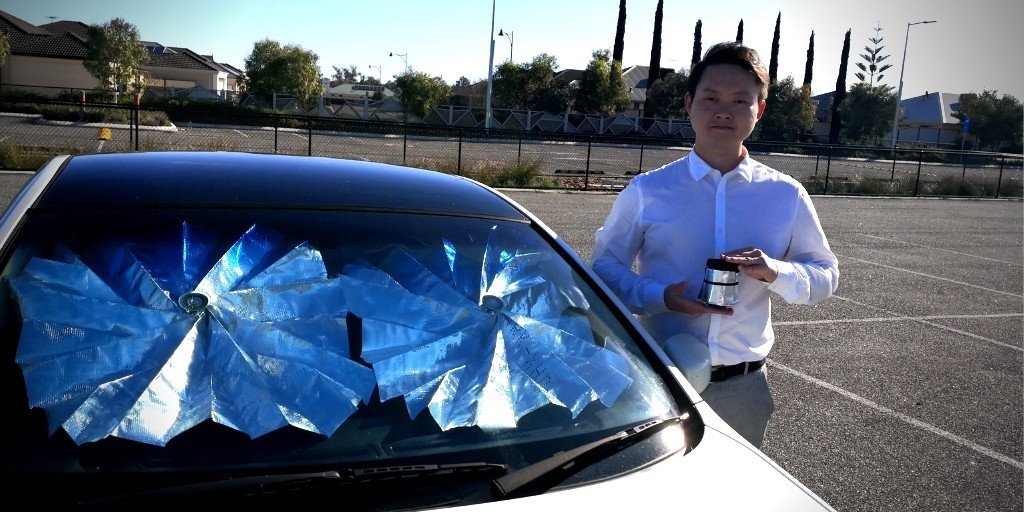 // Summer might still be a few months away, but here’s something to look forward to.

Have you ever owned a sunshade for your car? If you have, you’ll probably have found that it is very useful at keeping your car cool during those summer months when it gets unbearably hot.

But you’ll probably also have found that its very cumbersome. It takes up half of your wardrobe and by the time you lug it to your car, you can’t be bothered putting it up. But fear not, for there is a solution.

Perth startup Fledge Technology has been developing the ORION Robotic Sunshade for your car windscreen.

ORION robotic sunshade is a fusion of robotics and origami (paper folding), creating an automated car windscreen sunshade that folds and unfolds at the press of a button. ORION robotic sunshade folds small enough to fit inside typical storage spaces such as the cupholders, glovebox, or in storage compartment under the armrest.

“Many people bought a windscreen sunshade for their car, but they cannot be bothered to use it, even in Summer time.” explains Sandy Dasuki, founder of Fledge Technology.

“We like to think of windscreen sunshade as a pair of sunglasses for our car. It has to do a good job of protecting the interior, but must also be easy to properly install and store, and has to look great on the car.”

“If we can deliver all these values in one sunshade product, we believe that many more car owners will actually want to use the sunshade and derive the benefits”.

Last time we heard from Fledge, they were seeking their first investor.

Just before the end of the financial year, Fledge were able to gain that first investor, as well as hire their first employee. With the sunshade in its fourth version, Fledge Technology is preparing for a beta trial with several first customers at the end of July.

“We had 120+ pre-ordered from all the way back in 2019, and we are very excited to finally be delivering our Beta version to these local Early Adopters.”

Fledge Technology is confident its unique solution will appeal to both Australian and international consumers, and is looking to validate global market demand by launching a Kickstarter campaign in the last quarter of 2020.

“It is very exciting, because all parties agreed to continue building the relationships with us, after seeing the potential of this technology.” Sandy added.