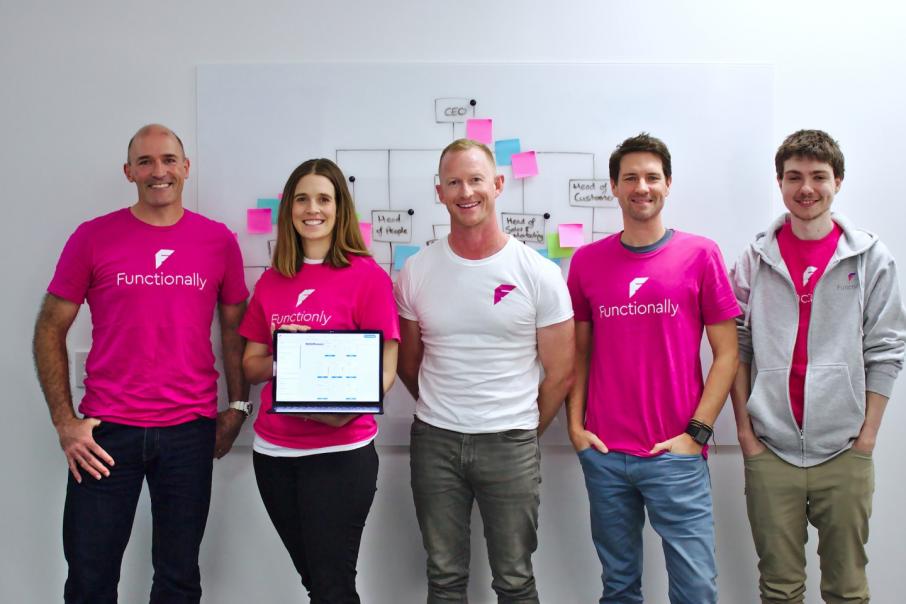 Why do companies tend to ‘break’ when they grow beyond 25 or 30 employees?

This is an issue the former Plus Eight Entrepreneur in Residence Tim Brewer had been grappling with in his various tech business advisory roles over several years.

After selling his own IT business in Perth in the late 2000s, he’d worked for Dropbox in San Francisco among other companies, ending up back in Perth around 2013, later taking on that EIR role, among others.

In late 2017, he took an idea to a Perth Startup Weekend – could there be a way of using technology to help companies grow without breaking? His team duly won the weekend, and Functionly (or ‘Functionally’ as it was known then) was born.

Throughout 2018 and then into 2019 he set up the company and built his team with fellow startup co-founder Damian Bramanis as CTO. Damian had previously done great things with Teamline, which grew to 50,000 users on Slack, and worked at VGW.

Raising funds for a prototype product, then ran some trials throughout 2019, and found that their customers really wanted a ‘drag and drop’ predictive, forward-looking tool that could help get people into the right functional roles at work. Roles that excited them, that they were good for, and wanted to grow with.

It’s a very elegant piece of tech, and solves a massive problem that most organisations have when they try to scale. It’s also backed by deep research in this area… (some of you may recognise the voice of Anna Powell in the video below, formerly of Yabble which was based in Perth a few years ago.)

Together with their matching private investment funds, and the AC grant, the team will now work to accelerate development of the beta product, as well as complete various customer trials in Australia and overseas. Curtin University are also involved in a research capacity, testing the effects of the tech on teams.

All going well, full commercial roll out will occur as they move into 2021.

A product of its time?

Throughout the COVID-19 crisis, Functionly has seen a dramatic increase and urgency in the need for organisations to respond with changes to strategy and resourcing.

Companies need to optimize the way they intentionally ‘design’ work – running scenarios to plan the changes that need to be made and understand the right tradeoffs to make.

This is exactly what Functionly allows them to do. Typically, this type of organisational design is very expensive and time-consuming, often requiring expensive management consultants or experienced executive hires.

“The grant will enable us to continue our momentum, despite the current economic situation brought about by COVID,” said Tim Brewer.

“[It will enable us to] bring a tool to market sooner which we know will be helpful to organisations in these uncertain times.

Functionly has already had paid trials of its product in the USA, UK, Egypt and Australia with companies including HappyCo, ServiceRocket, and HealthEngine sign up for the paid trial program.

“I was so frustrated with cobbling together Powerpoint and spreadsheets to present different ways of getting our organisation on the same page,” said Jindou Lee, CEO & Founder of HappyCo.

“Now we are using Functionly, we are able to more intentionally click all the pieces into place. The user experience and the team behind it are awesome.”

Full disclosure here – I worked on this grant application, as my last one for the AC grant program. I have to say that this was about the best application I had ever seen, with a very strong team, set of advisors and investors, an enormous market to go after, some very clever tech and what feels like perfect timing. Every user I spoke to absolutely loved the product. And most were already paying.

I am going to put it out there – this startup will be one we will hear more and more about in the future. It could be one of the best things to come out of WA.

No pressure Tim, Damian and team!