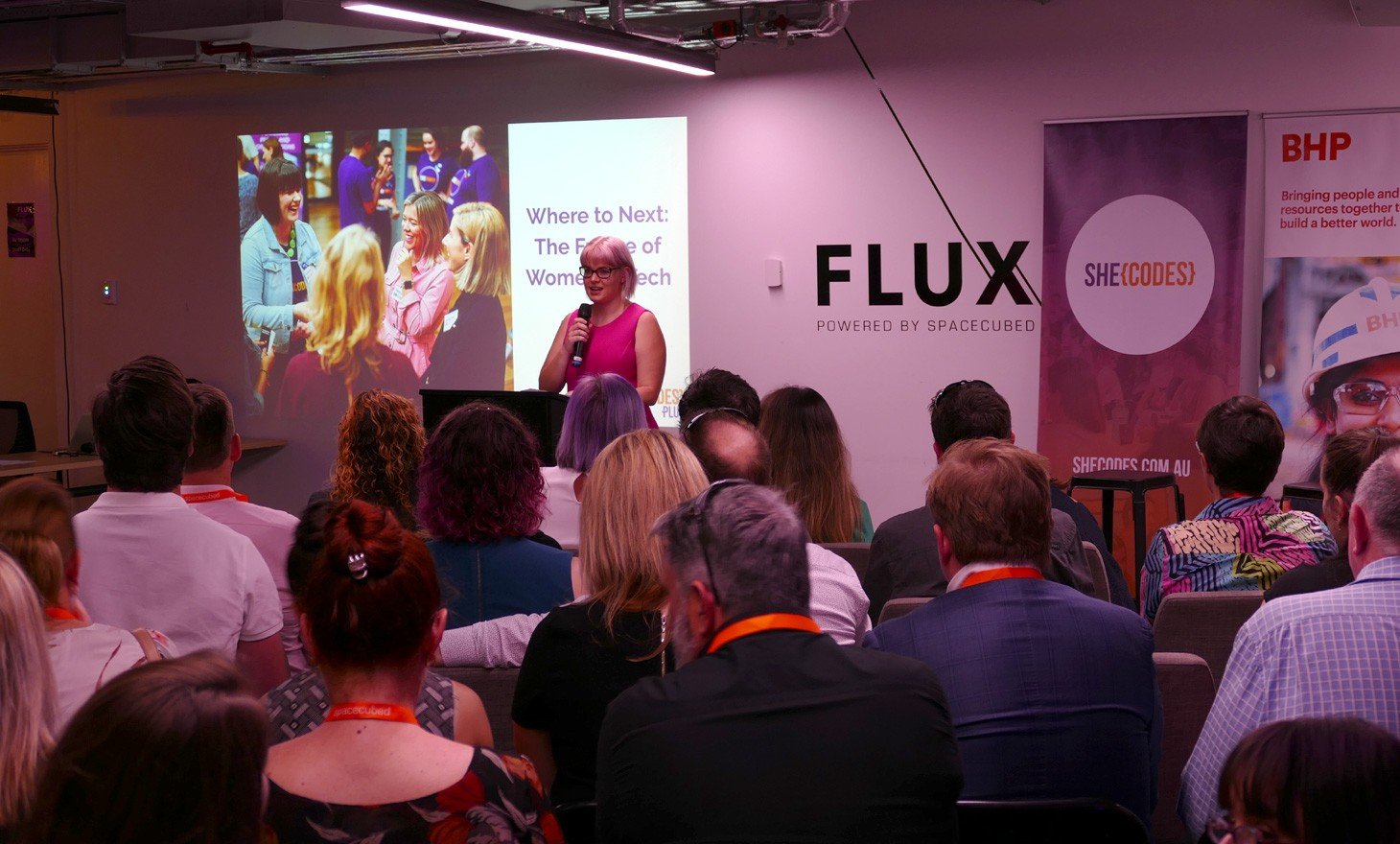 // A massive turnout at FLUX last night watched the graduation of the first ‘She Codes Plus’ cohort, a program to teach women to code…

At a packed FLUX Basement last night, people turned out to witness the first She Codes Plus cohort to reach the end of their 22-week program.

“In Australia, only 18% of graduates are in STEM subjects, whereas in Germany this figure is 30%”, said Diane Jurgens, CTO at BHP, sponsor of the She Codes Plus program.

Over the past four years, She Codes (formerly ‘Perth Web Girls’) has taught over 3,000 women how to code.

After founder Kate Kirwin spoke with Kieran McCluskey of BHP, they forged the idea on how to improve the pipeline of women entering tech roles. The vision became a reality with the She Codes Plus program.

She Codes Plus was funded by BHP and New Industries WA to upskill not only internal staff, but women across the broader community.

“Plus is so much more than just content,” Kate Kirwin told the audience. “It’s a community, it’s a fun and safe space, it’s confidence building and most importantly it’s an invitation.”

“We know that only 29% of tech is female, that 23% of STEM graduates are women, and that 75% of the fastest growing careers require tech skills. We also know that the gap is not because women don’t want to be in tech as is commonly cited.

“Our last Perth workshop sold out in 3 hours for 150 women with that many again on the wait list. Over 250 women applied for this first iteration of Plus – more than 10 times the number of spaces available. Clearly ‘not wanting to be in tech’ is NOT the barrier!”

By creating the community she longed for, Kate has been able to not only make social change and provide personal development but also create tangible business outcomes.

Three of the graduating She Coders have already secured secondments into the BHP Technology Team, one has secured a job in the Tech Team in her existing organisation, and one has changed companies into a more tech-focused role.

“That’s five tangible job outcomes, and we are still have three weeks to go on the program!” said Kate.

She Codes Plus powered by BHP will be running a cohort both in Perth and Brisbane in 2020, with applications opening in February for an April start date.

If you’re interested in being involved, whether as a participant, a mentor or a sponsor, please do not hesitate to take action and reach out to kate@spacecubed.com.

MAIN IMAGE: Kate Kirwin at the She Codes Plus program at FLUX Basement last night.