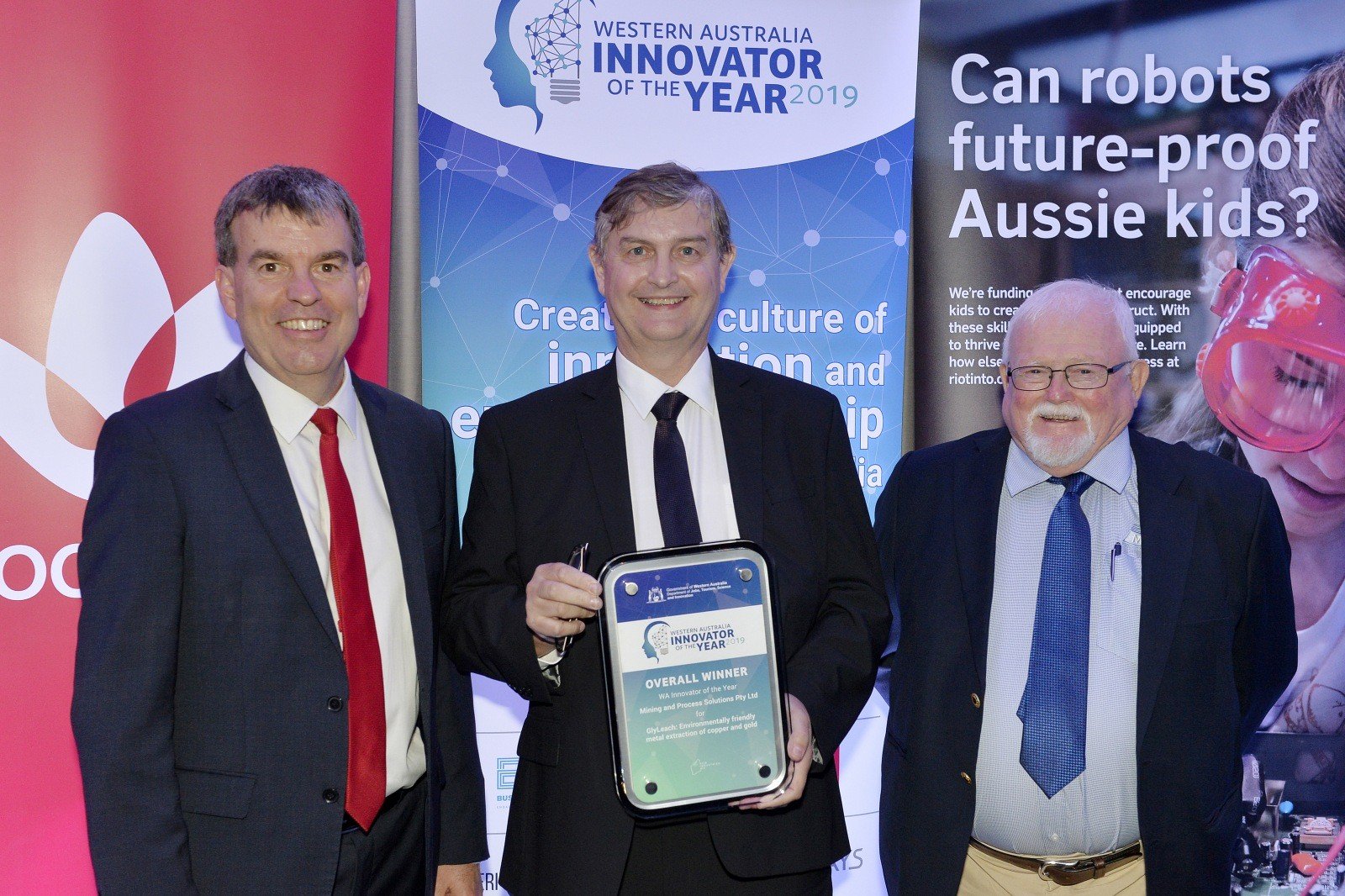 One third of the world’s copper is produced using sulphuric acid and over 95% of gold is extracted using cyanide.

Together with Curtin University, a relatively young WA company has developed a non-toxic, environmentally friendlier way to leach precious and base metals, and took top honours at the annual WA Innovator of the Year Awards last night.

“We did three of years bootstrapping and testing before we could commercialise the process,” MPS Managing Director Ivor Bryan told the guests at Fraser’s, “And today we have six signed licenses and five advanced projects.

“We are extremely proud to be commercialising a non-toxic method to extract metals.”

“Professor Jacques Eksteen, Dr Elsayed Oraby and fellow researchers at the Gold Technology Group within Curtin’s Western Australian School of Mines: Minerals, Energy and Chemical Engineering developed the GlyLeach system for environmentally friendly metal extraction from ore, which was then licenced to Mining and Process Solutions before being named the overall winner at the WA Innovator of the Year Awards,” Professor Moran said.

“The team’s development of a non-toxic, biodegradable and reusable solution to extract metals including gold, silver, copper and nickel from ore has global potential and the ability to increase the efficiency, safety and environmental sustainability of WA’s mining industry.”

Other winners on the night included UWA for its Weed Clipper weed control system, which can target weeds and till them as a standard cultivator drives across a paddock.

Vertical bike rack business Steadyrack won the Growth category, with founder’s son Jason Steadman on hand to accept the award. Sales of the system are now global, and have topped 250,000.

Craig Power’s Isol8 digital lock out system won the Digital Innovation Award, which looks to safely secure power during shut down and repair operations on mining and construction sites.

In the Young Innovator category, finalists from the Just StartIT program were presented, with Seton Catholic College’s Collective Care winning the honours.

WA Innovator of the Year started out in 2006, skipped a year in 2009, but has otherwise honoured 12 sets of innovators from across WA.

Startup West podcast will be interviewing the Chair of the Judging Panel Mark Pullen and one of the winners, Dr Andrew Guzzomi from UWA about this year’s WA Innovator of the Year program. Watch out for this episode soon!