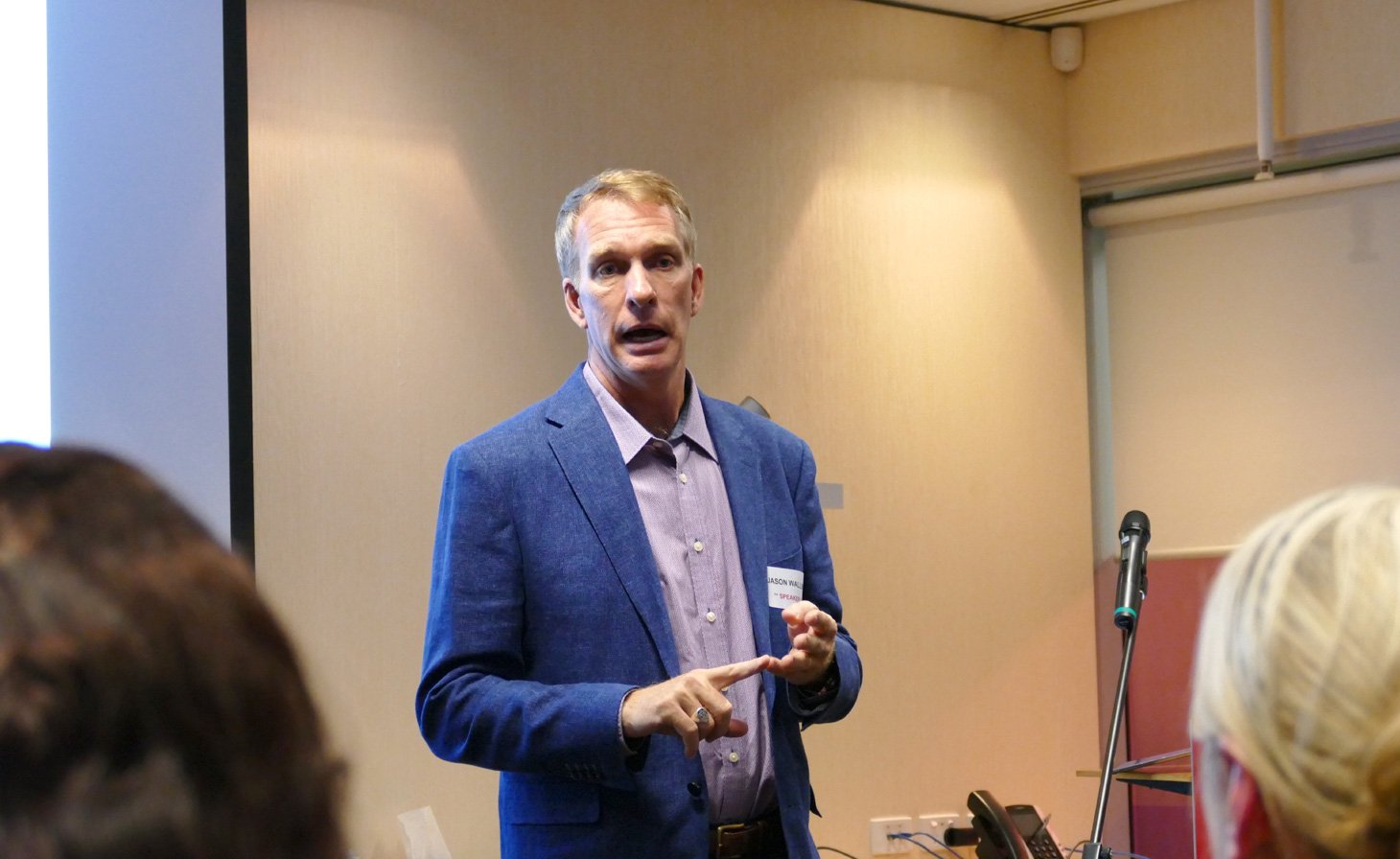 After 22 years as a decorated RAAF pilot, Jason Waller served his time in the private sector before becoming CEO at ASX-listed Spookfish in 2017, shepherding the business through to its sale to US-based EagleView in 2018…

Flying sorties over Iraq during the Second Gulf War may seem a world away from the cut and thrust of the ASX board room, but Spookfish CEO Jason Waller drew many parallels in his talk to the monthly eGroup meeting Tuesday night.

“As an ex military person, I wondered, what do I bring?” said Jason, “and one answer was: managing multi disciplinary teams.

“In the military, you are embued as a leader first, pilot second. This then holds true in business. You cannot manage anything beyond a small field of view, so you have to lead your direct reports if you are to lead anything as large as a group in Iraq or an ASX listed company.”

Jason explained the usefulness of the OODA loop concept (Observe – Orient – Decide – Act), which was devised by US fighter pilot John Boyd.

As if in combat, startup founders have to make quick gut decisions often with insufficient data and changing information. The OODA loop asks you to pause, think, sit back and decide on the next act. But quickly.

2 – Your product isn’t what you think it is

Needing to raise millions of dollars of capital to make their idea reality, (like so many others at the time) they bembarked on a ‘back door listing’ (or reverse take over) of an existing ASX-listed mining company in order to raise $5M in 2015.

Former eGroup committee member Stephen Rice was CEO during this time. The reverse listing worked, the share price rose and business grew. Meanwhile nearMap threatened a law suit, which they then pulled.

The odd sounding ‘Spookfish’ name came from deep sea fish that have mirrors for eyes, plus, as Jason remarked, the domain name was available.

Satellites can do broad level photography but not high definition. To get required resolution you need to get into the atmosphere.

The existing method was to fly planes over areas for $300K cost and waiting 6 months for hi def images on a CD-Rom.

But that status quo was being disrupted.

Usually there’s a trade off between resolution, reach and cost. Up to this time, you could get 2 of those 3, but not all 3. Spookfish allowed all 3.

Aerial imagery provides answer to many questions – such as how many new swimming pools have been built, or where are the boundaries to a new development or how much vegetation is there in South Perth?

“Often, you do not know what your product is. We were not an imagery company, we were a big data company,” said Jason. “We used AI and machine learning to sell a pixel image that has value to a client that will pay.”

“Your customers are not who you think they are. They may use aerial imagery for all kinds of reasons… and do!”

“People will escalate commitment on a bad course of action. When they’re lost, they carry on, hoping what they see will reinforce where they think they are. They’ll double down.

“Don’t do this. Go with your gut. It’s usually right. Step back, think. It’s your sub conscious telling you something. Listen to your gut.”

US-based Eagleview owned 12% of Spookfish and ended up buying the remaining stock at a 70% premium.

“They were buying the technology and buying into the Australian market, deciding that Spookfish’s technology was the best one to go with,” said Jason.

Overall, the acquisition was “handled well” and everything went along in an orderly fashion until the $136M deal was done in late 2018. $60M had been raised, and more than double this had been realised. In Spookfish’s final financial year, revenue was $13M, up from $2M the year before.

Since then, in an interesting aside, nearMap’s valuation has grown to over A$1 billion, having completed a $70M raise around the same time Spookfish was sold. This whole market is hotting up, you might say.

Meanwhile, the CEO of nearMap, well known Perth investment banker Rob Newman will be speaking at Innovation Bay and Startup Grind next week. It will be very interesting to hear Rob’s views on this market…

eGroup meets on the first Tuesday of the month, and is celebrating its tenth birthday in 2019. The author is a co-founder & foundation member of eGroup.