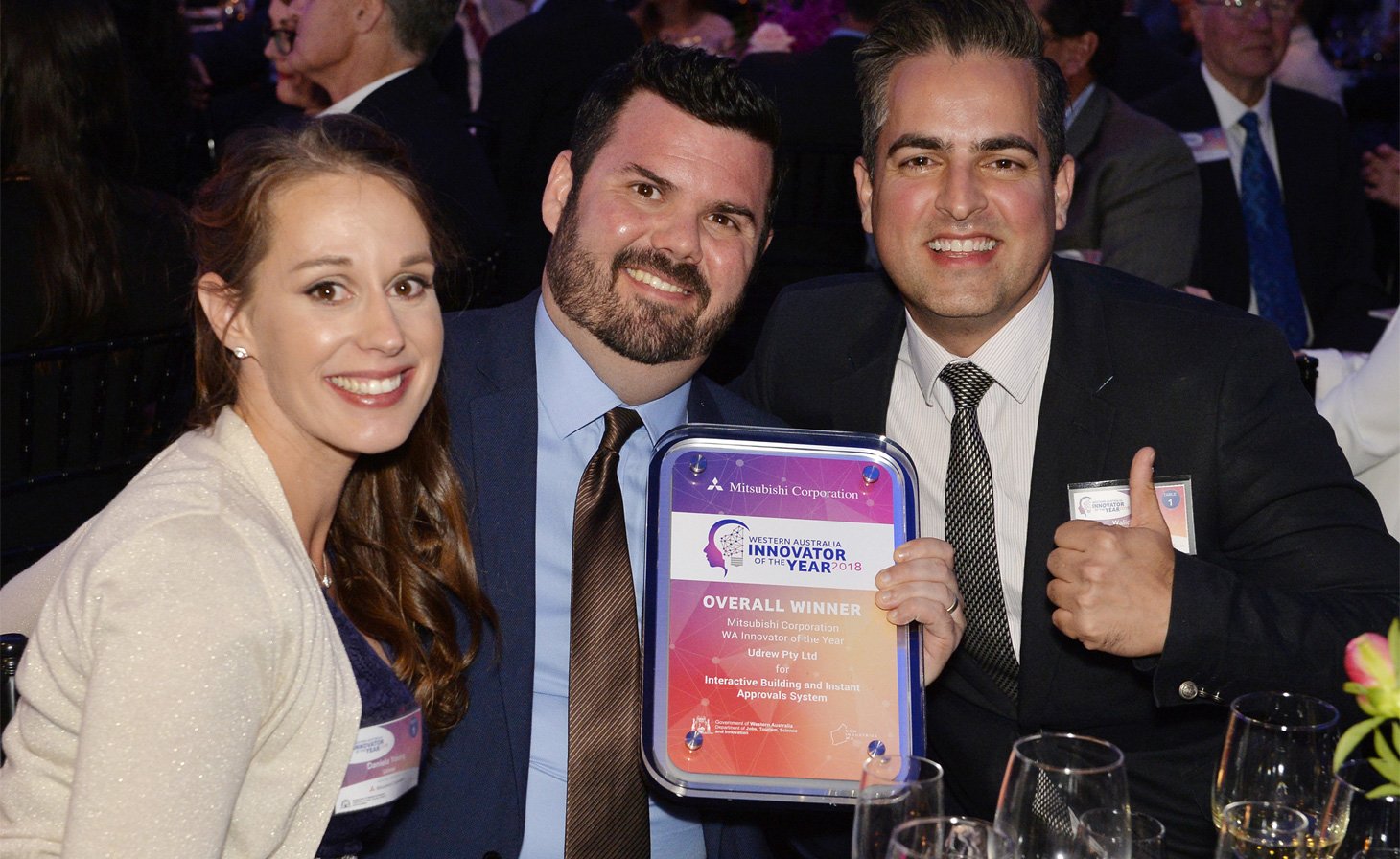 Online building plans and approvals software system Udrew took top honours at the WA Innovator of the Year Awards Wednesday night, with other startups getting in on the action too…

Was there ever a more unabashedly, sincere and modest winner than Tom Young of Udrew?

Those at Fraser’s on Wednesday night saw a hard-working tech entrepreneur, who has put his life and soul into his innovation, take out the ultimate prize at the WA Innovator of the Year Awards, and $75,000 to boot.

The former Curtin Ignition and Plus-Eight graduate looked genuinely shocked when his company was called out by the Minister for Innovation & ICT, Dave Kelly.

“Udrew is an exciting WA invention that allows residents and small business people to take control of their own design and approvals process,” said Minister Kelly.

“With Udrew, the cost of designing, submitting and approving a small residential project is reduced by upwards of 70 per cent and is forecast to save local government organisations, millions of dollars each year.”

Speaking the day after the night before – admittedly with a slightly sore head – Tom Young said the win was already making a difference.

“The exposure has been amazing and is timed perfectly for our upcoming launch,” Tom told Startup News.

“We had been struggling with attracting collaborative partners and beta testers and today have been bombarded already! Also, being a startup, having an extension on our runway [the $75K prize money] has really taken the pressure off and will allow us to focus on building and getting our product out without being distracted by the ticking alarm clock.

“Emotionally, it is huge for the team being validated for something we have put our hearts, minds and souls in with nearly a decade of naysayers telling us it was impossible.”

The State government supports the WA Innovator program with $150,000 from its New Industries Fund, which together with support from Mitsubishi Corporation, Woodside, South32, Business News and DXC Technology means the total prize pool on the night was a tidy $160,000. (see list of full winners and prizes below.)

Other winners on the night included the Noisy Guts Project, which boasts Nobel laureate Professor Barry Marshall among their number. They are also off to StartCon next month to pitch for $1M as the WA regional winners of that contest.

Swan Systems, WAITTA’s Startup of the Year winners earlier this year, took out the DXC Digital award, and TOKN, finalists in those same awards won the South32 Technology & Innovation award.

The wonderful team from Chemo@Home won the Mitsubishi Growth category and announced ‘This will pay for another nurse!’

A team from Sacred College won the student award with their ‘Austrailia’ trail map app.

One of the highlights of the night came when the WA Director of Mitsubishi Australia, Hiro Gohda, told the crowd to much applause:

“We are all so over the moon with this award and excited to prove to the world that Perth is a future tech hot spot. We have huge plans and this is just the tip of the iceberg!” Tom told Startup News today.

2018 WA Innovator of the Year winners: