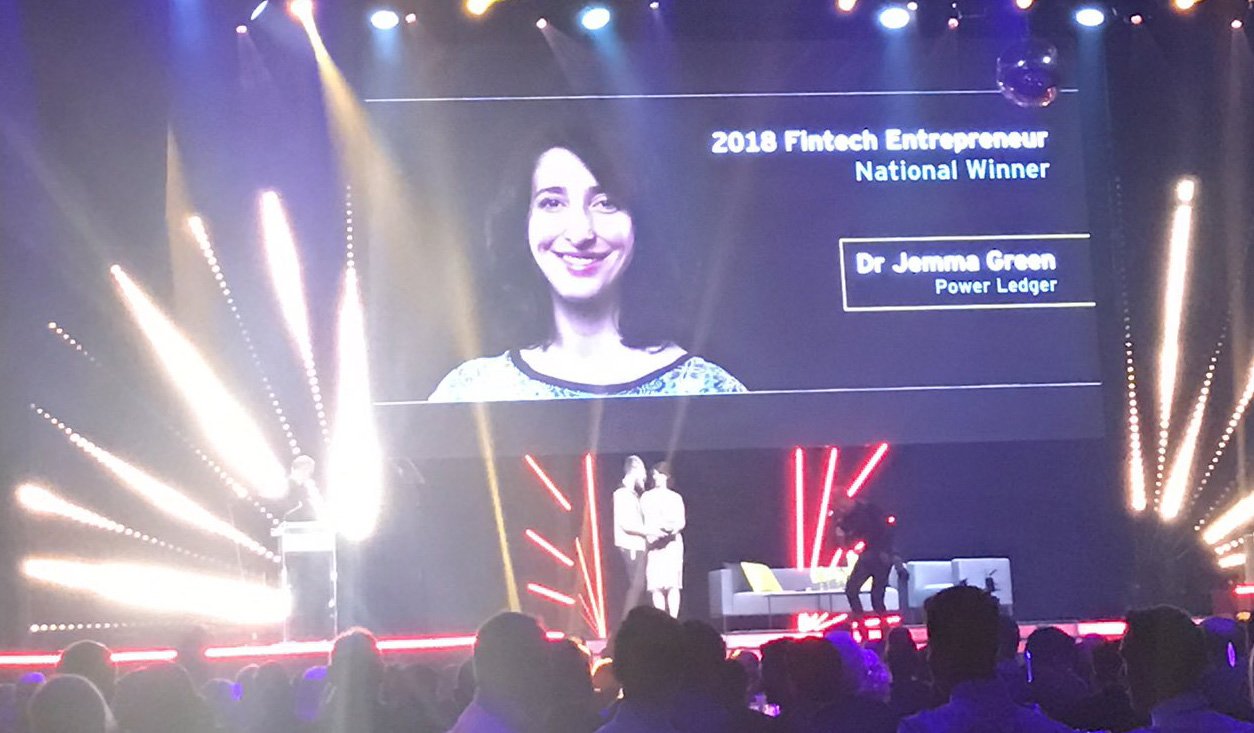 Earlier this week over in Sydney, the national EY Entrepreneur of the Year Awards were held, with WA regional finalist Dr Jemma Green scooping the Fintech award for her blockchain sustainable energy platform Power Ledger.

This comes hot on the heels of her winning the international Extreme Tech Challenge (on October 20th), an annual event hosted by Richard Branson held on his own private island in the Caribbean.

Back in Australia, having recorded a podcast with Startup West earlier last month, Jemma and some of her team flew to Sydney this week to be in the audience to hear whether she’d win in her EY Entrepreneur of the Year category (Fintech).

Having taken out the regional fintech category earlier this year, she was duly awarded the national fintech entrepreneur award on stage, where she enjoyed some tech banter with MC and ABC’s Hard Quiz comedian, Tom Gleeson…

It’s been quite a year for Jemma and Power Ledger, famously raising $34M in Australia’s first initial coin offering (ICO) in 2017 having co-founded the company only the year before.

In September this year, one of Power Ledger’s international projects went live in Thailand.

“The Thai government has enshrined in its legislation peer to peer trading, and we’ve just gone live there with a very exciting project [there],” Jemma said on Startup News’s recent ‘Startup West‘ podcast.

“The project already has just under a mega watt of installed capacity so far, but there is five to ten mega watts coming online.”

Despite all the progress and accolades, Jemma is modest about achievements to date.

“If we all do is raised money and nothing else, then this would be a huge failure,” she said, “It’s like we’ve stopped at a gas station and filled up with petrol. Now we have to get to our destination.”

“The corporate mission is around the democratisation of power, delivering low cost and low carbon energy. Lots of people say ‘Oh you’re doing so well!’ and I think ‘Well, we haven’t really done that yet.'”

“There’s still lots of people in the world that don’t have electricity, and as a result of that they can’t refrigerate medicine or they’re use cook stoves and polluting the air their children are breathing. Every morning we wake up with fresh dose of reality.”