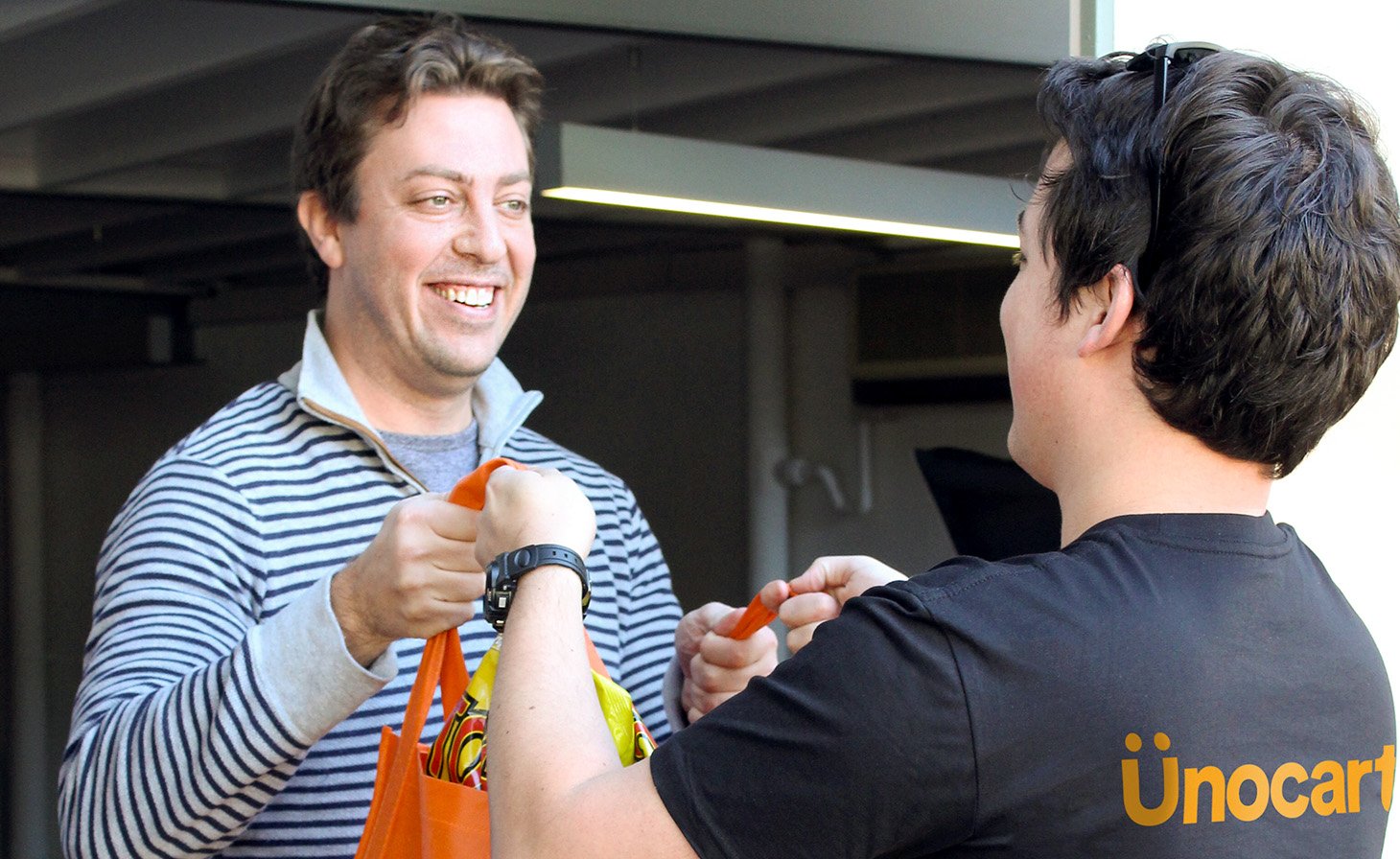 //SN EXCLUSIVE: From Monday, the FeedmeeNOW team will be known as Unocart, as part of their new approach to helping shoppers support those in need.

Having previously developed both a recipe discovery service and a platform which donated a meal to a foodbank every time users ate out under the Feedmee name, the team will now rebrand as Unocart – a groceries on-demand app.

In what cofounders Tyler Spooner and Brenda Lai said is an Australian first, shoppers can select products from Coles, Woolworth and Aldi, and have them delivered in the same order in as little as two hours.

After an almighty pivot, the team has enabled $100,000 of deliveries over the last three months with the new concept.

The rebrand to Unocart will become official on Monday 20th August, ahead of the service’s expansion into Sydney.

Tyler told Startup News the decision to pivot to grocery delivery wasn’t too tricky, since the heart of the business hasn’t changed.

“I wanted to create a platform that could actually help people,” he said.

“So our goal never changed, it’s just the way that we could help and then monetise the consumer changed, and the way we could give back.”

You Pivot if you want to

Tyler said his experience shows startups shouldn’t be afraid of changing their plans when things get tough.

“The worst thing is to be a ‘zombie startup’, where you get a little bit of traction but you’re not solving the main pain-point and you can’t scale it and you just go nowhere,” he said.

“The ‘why’ needs to be really important, so what are you trying to achieve?

The new concept was originally called ‘Feedmee First’ and it went live in January.

Tyler said he instantly knew they were onto a winner, despite some initial hiccups.

“Over December we put it all together, put it out there really rough. The platform was breaking but customers kept coming back and trying to use it,” he said.

“We knew that when people are sitting at the checkout for half an hour trying to give us money that we’ve found a pain point.”

Unocart uses personal shoppers for every delivery, who Tyler says are trained to pick the best produce and products and deliver them right to your kitchen counter – even offering to help put them away.

The app will allow personal shoppers to stay in constant contact with customers, to make sure nobody is left disappointed.

Having experienced homelessness in his youth, giving back has always been part of Tyler’s work and will still be an integral part of Unocart, as it was with Feedmee.

While the app currently donates a meal to a charity every time you spend over $50, Tyler said he hopes the initial roll-out of the app will generate the funds needed to provide greater support to food banks.

“I help out a few food rescue charities and what I found is there’s a lot of poor management of the logistics,” he said.

“With Unocart, you can plug on and do the shopping, but I want to take that and give it to those charity groups so that when you’re driving home, say from church or driving past a church, you can pick up a food parcel and then drop it off to someone in need on your way home.

“The only way we can fund that is to create a service that consumers want.”

Its’ quite a journey from the original ‘tinder for food’ idea that Feedmee started out its life as a few years ago, where users could swipe left or right for food that interested them in their local neighbourhood.