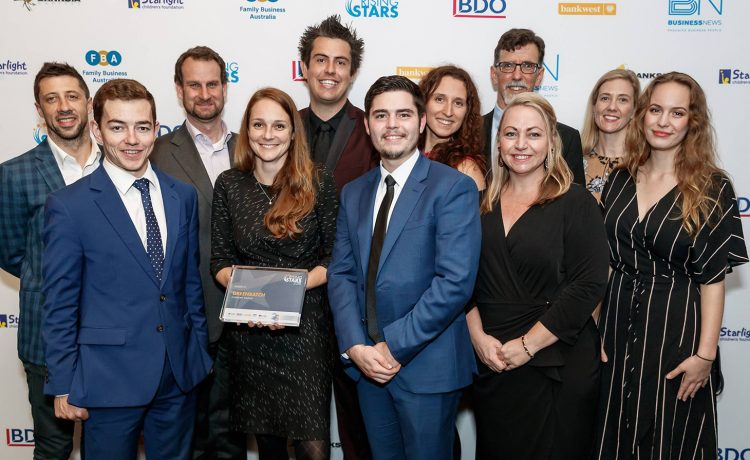 The social enterprise’s founder, Darren Lomman, is no stranger to startups, leaving his role as CEO at incubator and co-working space Bloom last year to establish his latest venture, after previously starting DreamFit at the age of 19.

Darren is also well know to Business News awards, having won its 40under40 award not once but twice.

Darren said the latest award recognises the groundswell of support that has made GreenBatch possible so far.

“One of the challenges for a startup is gathering the supporters and the crew that you need to turn an idea into reality, and we’ve got some amazing people that have come on board to support us as an early-stage startup,” he said.

“The award for us is just a showcase really, to our supporters that have jumped on board early, the early adopters, to say that, yeah, we’re going in the right direction, we’re going places, and thank you for backing us.”

The 34-year-old said he’s been blown away not only by the amount of support but also where it’s coming from.

“We’ve managed to pull in the Water Corporation and ATCO Gas and the University of Western Australia, and a whole heap of big names, which has been absolutely amazing,” he said.

“They’ve heard what we’re doing and what we’re trying to achieve, and they’ve actually reached out to us offering their support, which has been really phenomenal.

“As a small startup, to get some support from some of those big big players is absolutely fantastic, and I guess it’s because of their support that we’ll be able to do what we’re doing.

“Without them, it’s simply just an idea.”

Darren said that support has made it possible to be only months away from starting construction after only a year-and-a-half of operation.

“When we first started this the original plan was to setup a pilot plant that could reprocess 300 kilos of plastic a week, as a trial facility just to showcase to people that it could be done, and then we were going to use that to basically build a case for support and try and raise the capital required to build a full-scale industrial plant,” he said.

“Between now and the first five months of this year, we’ve pulled in all of those partners, and what that means is we’re basically skipping that pilot small-scale lab facility and we’re going straight to the industrial facility right now that can do 300 kilos an hour.”

According to Greenbatch, recycling plastic commercially is too expensive, leading to at least 98% of WA’s plastic being burned for fuel overseas.

The 2007 WA Young Australian of the Year said changing this reality is why recycling plastic needs to be taken out of the hands of for-profit businesses.

“I think we will struggle with just purely corporates coming in, doing it from a corporate, commercial, for-profit perspective,” he said.

“You’ve got to have a bit more of a driver than just profit sitting behind you.”

Darren said the motivation behind filling this gap in Australia’s recycling industry is the bigger picture.

“[It’s about] knowing that in your time on Earth, you’re going to leave it a better place,” he said.

“If you look at the net impact of your footprint of a human being on this planet, have you actually achieved something worthwhile?

“That’s something that’s always driven me since I’ve been a young kid.

“That worthwhileness is not measured in dollars and cents, if you ask me.”

Darren said the importance of making a difference in startups became even clearer while he was CEO at Bloom.

“Some of the people come into it just to make money, that is their purpose, but [they] haven’t got a connection to their ‘why’.

“It needs a lot of from the founders, a lot of determination and a lot of resilience, ability to pick yourself up after the rejection when people say no, and just keep on fighting and believe in what you’re doing and why you’re doing it.

“That’s why I think knowing your why is so important, otherwise it’s really easy to quit and give up.”

As for what’s next, Darren said he just wants to keep making a difference.

“I’ve bitten off quite a big chunk of work to tackle, and my brain is 100% committed to solving this challenge right now,” he said.

“[I have] no idea what the future will hold in 10, 15, 20 years’ time, but I can guarantee it’s going to be something that is community focused and where I can create a positive impact on the community.”

In the 2018 Rising Stars awards, there were other wins for startup companies and those associated with the startup industry.