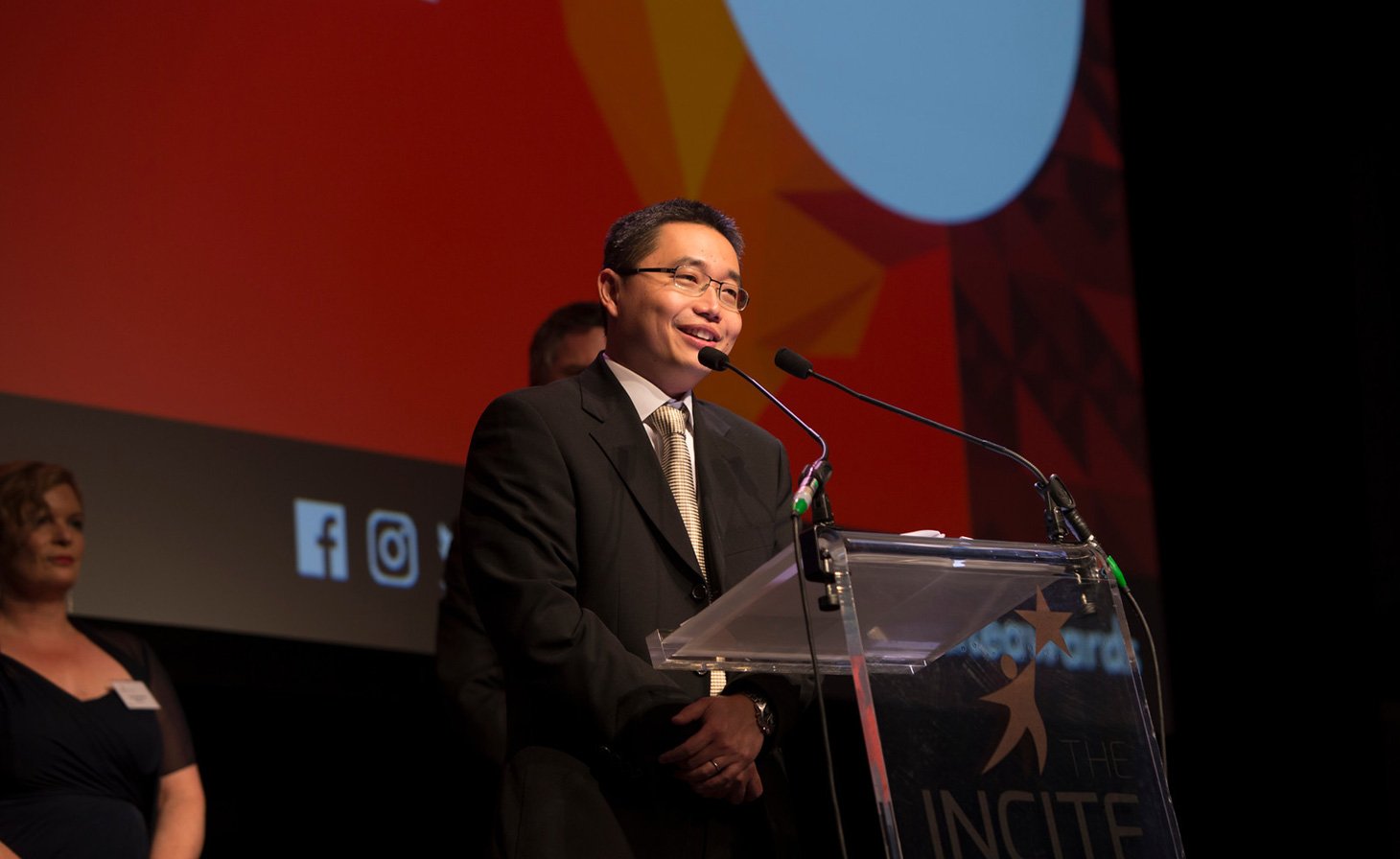 450+ people attended the 27th annual Incite Awards (as organised by WAITTA) at the Crown Perth last Friday, with HealthEngine, Agworld, SEQTA, ClickSend, Boundlss, HummTech and Swan Systems among the winners…

It was quite a week for Dr Marcus Tan and his 150+ staff. If he was ever to be stuck – Groundhog Day style – in an ever repeating loop, then last week would probably not be one he’d choose, however it did end with some impressive accolades by being inducted into the WA Tech Business Hall of Fame and winning the inaugural Dr Mal Bryce WA Tech Business of the Year at WAITTA’s annual Incite Awards.

It had begun with the stinging criticism from Fairfax Media that 50,000 or so reviews on the doctor appointments booking site had been altered. The claim was that only the good bits of the customer reviews had been published, even though all the comments (good, bad and indifferent) had been duly passed onto the practices concerned.

As Dr Tan and his fellow Directors took pains to point out in response, HealthEngine was never trying to be a reviews website, and had left all the positive comments on the pages in order to give positive encouragement to those that gave great customer service. However, in the flaming pit of public opinion it had probably failed the ‘pub test’, and HealthEngine took immediate steps to remove all customer comments from the site pending an internal review.

In accepting the WA Tech Business award, Marcus made it clear that, despite the week he’s had, Perth and Australia was a great place to build a scaleable tech business from.

He thanked WAITTA and everyone involved in creating this award, and others in the audience, for their encouragement of the tech sector. HealthEngine now has 2 million active users a month, and has doubled in size in the past year. Over 5,000 practitioners across Australia are on the platform.

Joining HealthEngine in the inaugural WA Tech Business Hall of Fame was SEQTA, the wildly successful school admin software platform cofounded by husband and wife Grant and Sharon Grosser, who were both there on the night, together with Chairman John Vickers and others in the team. Agworld, the farmer productivity system used by 28,000 agronomists and farming organisations was also inducted into the Hall of Fame, as was ClickSend, a burgeoning online messaging business which is experiencing rapid growth.

At the other end of the scale, no less than six startups were in the running for Startup of the Year, with Humm Tech and Swan Systems becoming national iAwards finalists, and Swan taking out the ultimate prize.

As reported by Startup News last week, Humm are already in Silicon Valley having landed a US-based investor. They messaged Startup News on hearing the news that they had made it through to the nationals saying they were “celebrating with a beer in a bar in Berkley.”

Cofounder of Swan Systems Rod Campbell was on hand to accept the Startup of the Year award.

“This is a great achievement for us, and I would like to thank everyone involved,” said Rod. “Especially all those that have helped us get to this point, including the local government and also the Australian government for our AC (Accelerating Commercialisation) Grant.”

Swan Systems had won a $20,000 Premier Prize two years ago for their innovative water and nutrient management system, and earlier this year a $590,000 matching grant from the federal government which will allow them to commercialise their break through agtech solution for large irrigators, water utilities and local councils.

“One thing we will never get more of is water,” Rod reminded those present, “and if ever a good idea to save our use of it was to come out of anywhere, it was probably going to be from WA, one of the driest States on one of the driest continents on the planet.”

Boundlss were national finalists in two categories, the Most Impactful Social Benefit and Most Effective Infrastructure Solution for their AI-powered, conversational member engagement tool for Health & Life Insurers.

All winners and national finalists are listed below (first mentioned is the WA winner of that category; next mentioned, if any, also go through to the national iAwards which will be held later in the year)…

It was a long night, with the event wrapping up about 10 minutes before midnight, but that was maybe to be expected with the addition of some new awards this year and loads of finalists to get through. Every finalist has their video shown on the big screen before the winners are announced.

Well done to all the organisers of WAITTA (WA IT & T Alliance), and congrats to all the finalists, national finalists and WA winners.