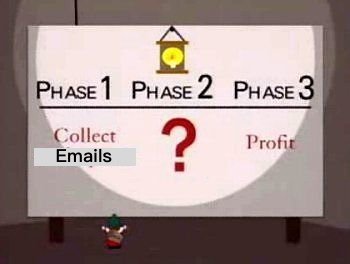 Startup News couldn’t return without Lean Hackman, so we persuaded the old warhorse to stop messing about and write some more vitriol for our amusement and edification.

Have you tried setting up a blog? I almost did. I got the Startup News guys to set it up for me, because they offered when //SN looked like it was doing a Google and closing a product while people were still using it.

Faced with a blank page, and realising I would have to do this every sodding week, I didn’t write a thing. No-one to tell me when to post, no-one to nag me into writing something. And if I don’t do it, then it doesn’t happen. And I’d have to find readers. Nope, I’m happy it all failed and I get to write the occasional bile for //SN again.

I see Miles did his growth hacking thing, though, and got a bajillion email addresses (and some sponsors) for his growth.email experiment. Good for him. I’m slightly perplexed as to what happens next, though. It doesn’t seem like there’s actually a business in there. Like a nervous teenager who finally gets to experience a naked member of the relevant sex but has no clue what to do next. Hooray! you’ve got customers! Now what?

There’s a lot of this about now though. The point of growth hacking seems to be to get a lot of email addresses. What happens next is a bit blurry. I suspect some point-scoring on HN, a bit of bragging at Growth Hackers Anonymous, and then some half-hearted attempt to monetise and it all dies quietly in the corner. Clicking through the inbox of a morning is a matter of spotting the occasional actual communication in the swamp of promotional hogwash. I realise the customer isn’t the reader, the customer is the advertiser, and the old adage of “if you’re not paying for it, then you’re the product” applies. Miles has got enough sponsors to make his $99 experiment profitable, after all.

It annoys the buggery out of me that you have to get a bazillion people interested in your content in order to sell one sponsorship to an advertiser. Why haven’t we solved this yet? Why is Miles working hard to generate something useful for people who don’t want to pay for it? Are we that entitled and spoiled that we won’t pay a couple of bucks, and instead prefer everything we consume to be liberally smeared with shitty ads? It’s like we ask craftsmen to produce some beautiful, delicate work of art, but then refuse to pay for it unless the dunnyman has been and covered it in shite.

There’s similar stuff going with apps now. The only way to get significant numbers of downloads for your app is to give it away for free. So apps are now only ever gateways to other business models. Any app that actually does something useful on your phone is either swamped with ads, someone’s hobby, and/or undiscoverable.

Medium tried to do something about all of this, and failed. Mind you, some billionaire announcing that they’re going to change the way an entire established industry works by building a mumble mumble mumble is a guaranteed fail from the start. The scrawny little bugger from Utter Pradesh who managed to cobble the thing together out of recycled bicycle parts and sell it to their mates for pocket money is more likely to have a real solution.

I have faith. Some scrawny bugger will come up with something, and we’ll have the nice things again eventually. The scrawny bugger will be rich beyond anyone’s wildest dreams, and there’ll be a hundred new Ideas Guys pop up at Startup Weekend trying to build “scrawny bugger for pets”. Also one sad old bloke in his old hi-vis, moaning into his beer mid morning at the suburban pub, about how he came up with that same idea ten years ago but no-one would back him and they never gave him a chance to make it happen. He’ll have the barmaid say ‘there, there’ but what she actually means is ‘You shoulda done it, you freaking cry baby’.

Anyway, that’s enough from me. No doubt I’ll be writing more soon when the lads have nagged me enough. Nice to be back.