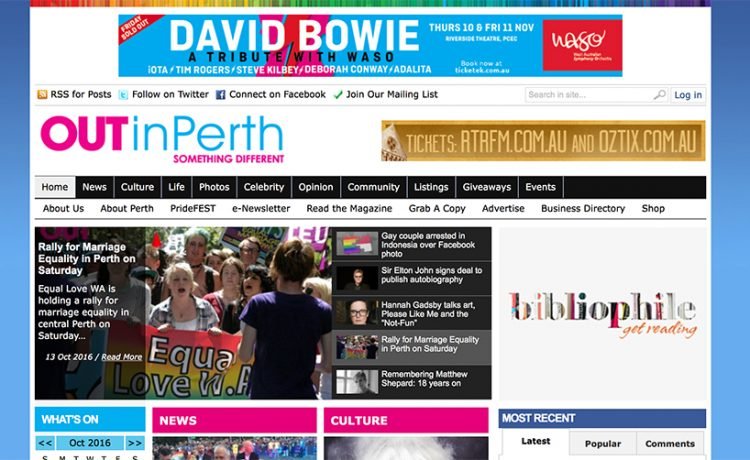 This interview is a little different than normal. Imagine working at a magazine, which then goes into receivership and before you know it, you and the employees are buying what’s left? That’s Graeme’s story about Perth based LGBTIQ+ magazine, OUTinPerth.

//SN: Hello Graeme, you’ve got an old business that’s now a startup. In other words, you’ve bought out your own boss. Can you tell me a little about what happened?

I became the editor of OUTinPerth a little over five years ago. Over that time the publication has transformed from being and old fashioned community newspaper to a multi-platform media outlet. We now publish a glossy monthly magazine, as well as maintaining a 7 day a week news website and weekday e-news. At the start of this year we launched our first podcast and we’re active on several social media platforms.

In April the company that owned the magazine was placed into liquidation. With little notice, our small team was suddenly unemployed. We headed to the pub and had some farewell drinks, stunned at the sudden change in our circumstances.

The next day we began negotiating with the liquidators to by the publishing assets of the company. The magazine was a tiny part of a much larger business. Over a 7 day period we went on a roller-coaster ride. We had to bid against other people who wanted to buy the magazine and raise the cash – all within 24 hours.

//SN: So where did the idea for buying your previous employer come from?

During the week where we were in limbo so many things happened. There were some really huge LGBTIQ+ news stories, we couldn’t write about them because we didn’t have a publication. It was frustrating. It make it very clear to us that not only are we journalists, we’re queer journalists. We have to write about our community. It’s just what we do.

The thought that somebody else might by the magazine and not knowing what would happen to the back catalogue of everything that’s been written by us and our colleagues over the year – that was a big motivator.

//SN: Now that you’ve taken over the business, what problems or challenges have you come across that you can you share with us?

Rebuilding a business is tough, like any new enterprise. We were able to buy the intellectual property but we didn’t have an office, computers, cameras or sales staff.

We spent a few months working at home, and in cafes, the library and various pub beer gardens. Then we spotted an amazing office opportunity, it ticked all our boxes and was very affordable. We didn’t plan to get an office in until our second year of operations, but when a great opportunity comes up you’ve got to be able to adjust, adapt and then make a decision really quickly.

We covered the federal election using only our iPhones and laptops. Explaining to Bill Shorten’s security detail that you’re going to have to really really close to take his picture is a memorable moment.

Time management has been really essential. We can’t afford to pay delivery staff yet, so we’ve been delivering 10,000 magazines ourselves, and balancing that with writing, organising, budgeting, accounting and everything else in our lives. We pretty work 7 days a week, and never stop. Even when we take some time out and watch TV, we’re still checking our Instagram feed, answering emails and posting on Twitter.

This month we’ve hired a first employee, Renee Pole an advertising sales wizard! We’re so excited to have her join our team, knowing that we were ready to begin hiring staff was a landmark moment.

//SN: You also launched a crowd funding campaign to help fund this buy out. Tell me more about that?

We’ve seen lots of businesses launch through crowd funding over the last few years, everything from café’s to social enterprises. We felt comfortable asking the community to help fund our venture because of the nature of what OUTinPerth is, it’s a community focussed publication.

For fourteen years people have picked up a monthly magazine for free, our revenue has come from advertising, the readers have always gotten it for free. We felt confident that asking them for $5 or $10 wasn’t an outrageous request. We’ve been stunned by how generous some individuals have been.  So far we raised $10,000 via our Go Fund Me campaign. We’ve also organised a series of community events that have brought us in some additional revenue.

//SN: We often hear that print is dead, and the Internet has killed publishing. What do you say to those naysayers?

Ten years ago I worked in television and people said it had little future, naysayers predicted that TV budgets would get so low all you’d be able to make is something involving one camera, a desk and a single light. Yet here we all are obsessed with Game of Thrones. When I worked in radio everyone called it a heritage medium, but there are great radio programs and podcasts have exploded. Things just change, but they don’t die.

All that’s happened at OUTinPerth over the last five years is our distribution has remained steady at 10,000 copies, our pagination has remained steady at 32-48 pages (and has been as high as 60 pages). Our pickup rate has always been high – over 90%. During that time our web audience has had huge growth from 5000 to clocking 35,000 – 40,000 unique monthly page views.

You have to be digital and in-print. Nothing beats sitting with a coffee and a good magazine.

//SN: If there’s one tip that you would suggest to someone with their own magazine publishing idea, what would it be?

Magazines have a fairly simple business model. Be interesting and get a dedicated and engaged audience, that audience is what you are selling to advertisers. If you want to add a cover charge for purchasing the magazine – be even more interesting, provocative and creative.

People always tell me they want to write columns in OUTinPerth. I think lots of people dream of being Carrie Bradshaw in Sex and the City. When someone pitches me their idea for a column I ask them to write down 24 story ideas. If you can’t think of 24 ideas, your column clearly won’t last 2 years. When I was asked to be the editor of OUTinPerth the first test I gave myself was to write down 200 story ideas.

Then ask yourself do 10,000 people want to read these articles?