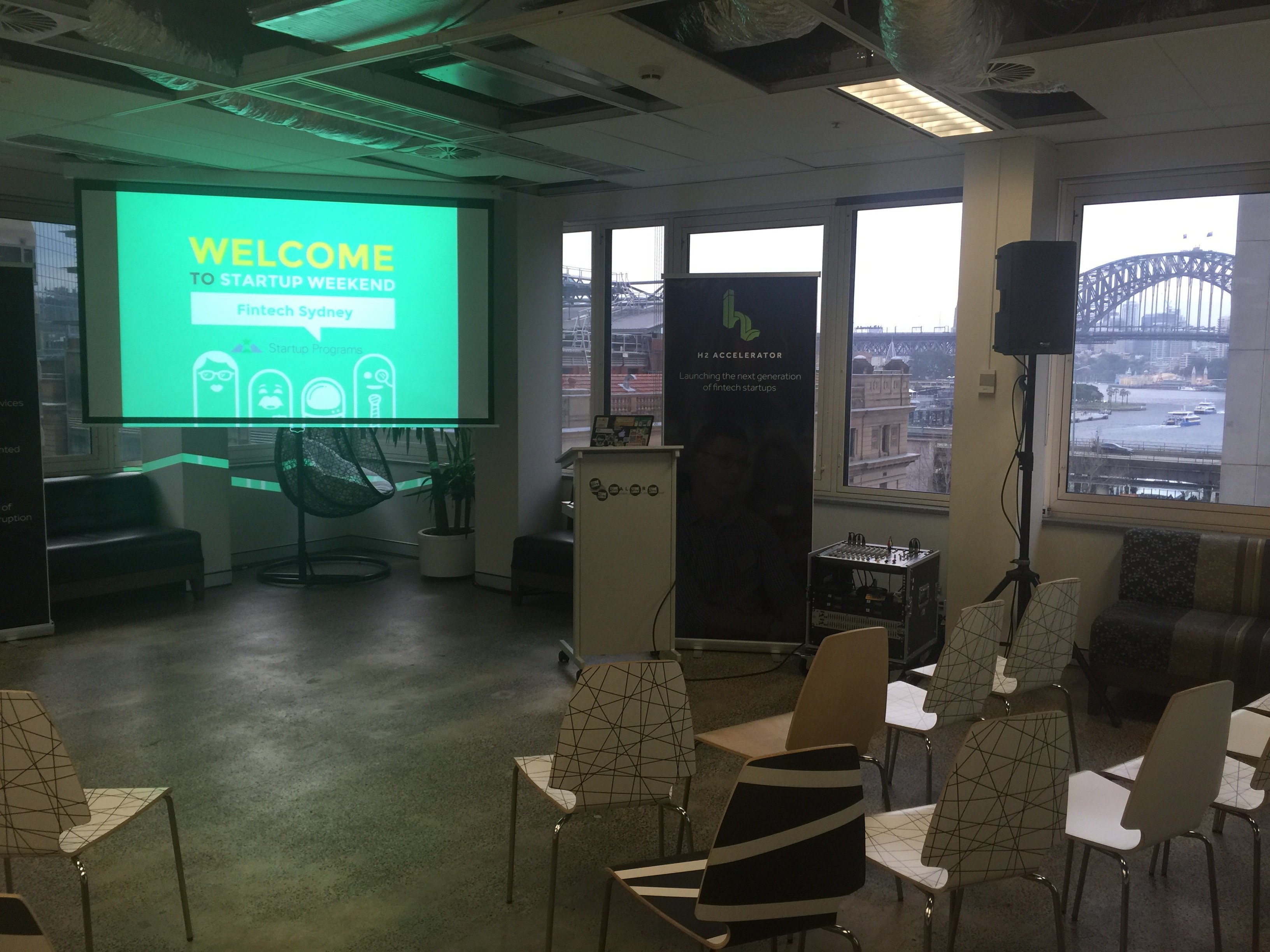 Last weekend I facilitated the Sydney Fintech Startup Weekend. This has nothing to do with the Perth startup scene, but I don’t have a personal blog any more so you get the benefit of my experience. Some of you might find it interesting. If not, normal service will be resumed shortly.

The event was held at Stone & Chalk, which is a coworking space in the heart of Sydney. You can see the bridge out of the window. When I arrived on Friday it was filled with startup folks doing startup stuff. A lot of startup folks. An intimidating number of startup folks. All of them fintech startup folks. The Sydney fintech scene is large, Sydney is trying to get known as the fintech capital of the Southern Hemisphere, so the scene is well-supported and well-financed.

The event was organised by Al Bentley, a Perth Startup Weekend veteran who moved to Sydney to build his startup, Simply Wall St, which we’ve covered before. Al had persuaded H2, a local venture finance outfit, and Stone & Chalk to get involved, who supplied Melissa Hurwitz as the main venue organiser. A great team, and the organisation for the event was really well done, especially for a first time. Andy Lamb from TechHub flew over especially for the event, given their new focus on fintech it made sense for him. It was good to have a couple of familiar veterans on the team too.

The Startup Weekend event kicked off as normal. Almost no-one believed me when I said they would be getting customer money by Sunday, as usual. There were quite a few people who didn’t get the fintech angle at all, and there were a few questions around “can we pitch non-fintech ideas”. We didn’t really have a good working definition of fintech so we had to muddle through that, and this became an interesting point later on in the weekend. But mostly the pitches were fine. Forming teams was fairly easy, we imposed a strict limit on team sizes of 4-8 people, and that produced a set of 11 teams of workable size.

Friday night rounded off with a few teams actually getting out to talk to customers, which was a great start. Most teams got the point that the best thing they could do was validate, with a couple of notable exceptions. 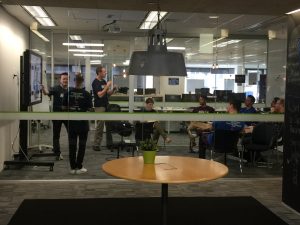 Saturday morning kicked off with the usual “what the hell are you doing in here? There’s no answers in here, get out there and find a customer to talk to” shenanigans. Actually one of my favourite parts of the weekend, because seeing the attendee’s faces after their first real conversation with an actual customer always gives me warm fuzzies. They suddenly understand that people like talking about their problems, and if you’re solving a customer problem they want to give you money. The first team coming back with actual money had done some inventive experimentation with homeless people to discover a few interesting things about donations.

By Saturday afternoon we had three teams with some form of financial validation, and almost all teams were beginning to get the idea by this point. One team were still pivoting in the wilderness, and had arrived at a bizarre idea about a game to solve international trade finance for pirates, or something. None of us quite understood it but they seemed to be keen, so we pushed them anyway.

Saturday evening rolled into the long dark stretches of fatigue and sugar overload. Most of the teams had left by the time the venue closed at 10pm, gone to work from home or talk to customers.

Sunday dawned with pretty much all the rest of the teams getting some customer cash. One team of Startup Weekend veterans (from other Startup Weekends where they obviously  don’t prioritise validation so much) hadn’t really listened to a word I’d said, and had assumed they were doing the right thing. Convincing them that building something that no-one wanted was bad, and that they had a few hours to prove that someone wanted what they’d built was interesting. But they managed it by the end.

Wanna try tripwallet as one of the very first? Find us around the Sydney CBD! #swsyd16 #traveltech #fintech pic.twitter.com/lC0uYeQ8M3

The pitches went off pretty smoothly, apart from Google Slides playing silly buggers with the slide deck I’d put together of all the pitches. I think in the end out of 11 teams, 8 or 9 had customer money, and all of them had some form of validation that they were building something that someone would want to buy.

You can see all of the pitches here:

My verdict on the event: considering all the attendees and mentors were SW newbies (apart from the one team that almost cocked it up completely) they did really well. Getting past all the preconceptions and asking customers for money isn’t easy for newbies to do, but everyone seemed to understand the concept quickly and get on with it.

The maturity of the Sydney scene didn’t really show up here. A lot of the ideas were generic and had been seen before. One or two were utterly original and they struggled to get the judges to understand them (Share My Share and Pirates of the Pacific stand out as my favourites for this). I would have expected more “hard” financial service ideas from such a mature scene, but then Startup Weekend is designed for new founders so maybe that’s why.

The mentors, almost all of whom hadn’t attended a SW event before, were great and got into the spirit of it. In particular Rob (who got two of the toughest teams) and Monica (who got to babysit a team through a really tough few hours) stand out.

Congratulations to everyone involved, well done and good luck with the next one!