The City of Fremantle has a new Economic Development Program, which sees small innovative businesses as a key component of the local economy. To assist small Freo businesses, they’ve given fSpace some funding, which fSpace are sharing with local businesses in a new program.

The City of Fremantle and fSpace Creative Industries Program offers qualified businesses three months of subsidised workspace at fSpace. Qualification is mainly based on the business being small and “Creative” – architecture, IT services, design, film, media, etc. 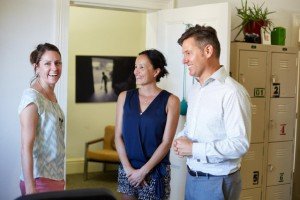 Lisa Jacobs from Pod by LisaJ talks about her Graphic Design Business with fSpace owner Sabine Albers and Fremantle Mayor Brad Pettitt. Lisa is one of the first approved applicants for the fSpace and City of Fremantle Business Development Program, launched February 9, 2016. Image by Amirrul Khirudin at fSpace.me

“the City views the continuing emergence of creative industries as a key driver in Fremantle’s ongoing rejuvenation. The partnership with fSpace is a great fit for us and we look forward to being able to help kickstart some innovative local businesses that hopefully go on to become industry leaders.”

fSpace is Fremantle’s creative professional co-working space. Located right in the heart of Freo, it has been providing desk space for freelancers, small business teams and professionals since 2013. fSpace owner Sabine Albers said she was excited to be partnering with the City of Fremantle to help creative businesses, and :

“Each month people come into fSpace wanting to start their own business but struggle with the financial commitment to make a go of it. This program will provide the opportunity for people to work alongside some fantastic entrepreneurs at fSpace and will help get innovative business ideas off the ground or take an existing venture to the next level”

The program is available to new startups as well as existing businesses looking to develop and grow in Freo. For more information visit http://fspace.me/business/