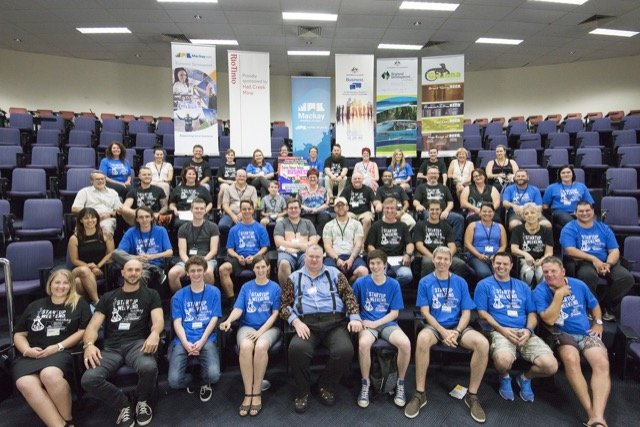 I spent last weekend in Mackay, Queensland, facilitating their first Startup Weekend. Here’s my ponderings on it.

Mackay is a mining and farming town of 120,000 people in regional Queensland, a reasonably typical regional Australian town (except the person who provided the voice of Siri lives there…who’d have thought?). They’re feeling the pain of the mining downturn, and struggling to work out how they replace those mining revenues. Almost everyone I spoke to had done a stint on the mines at some point, and it seemed to be very much a part of town life.

The event was held in the local university, a great venue for the event (a lecture theatre for the talky bits!) and clearly the event had the support of the town – the mayor was one of the judges and handed out the prizes. There were over 100 attendees in all, with 23 participants (out of 33 tickets sold) who formed 5 teams during the weekend, a great turnout for the size of population.

There were 7 technical tickets sold, and around 5 people attending appeared to be capable of building something webby or appy (including one “non-tech” who actually spent a chunk of the weekend building a decent wireframe iOS interface in XCode). The organisers made no distinction between developers and designers and had one volunteer on hand to help the teams design logos, etc.

Out of the 5 teams, 3 managed to get some kind of customer validation in the form of actual or committed purchases, and 1 team had a verbal confirmation of intention to invest. The ideas the teams pursued broke down to:

This was the first event of its kind that the local StartupMackay organisation had organised, and the organisation team had it well in hand. The event ran really smoothly with no problems, apart from the usual hassles with wifi that every SW event has the first time (the wifi provider seriously underestimated the bandwidth required for a Startup Weekend!).

The skype call with the founder of That Startup Show was a bit of a highlight – a great conversation and linking in to the wider national startup community to talk startup stories really helped set the mood for the rest of the day.

There were a few local entrepreneurs and startup folk to mentor the teams, and they did a great job. The town’s startup community is just in the early stages of getting going, so there wasn’t the usual set of experienced startup founders to call on as mentors, and some of the mentors had never been to a Startup Weekend before, so there was a definite learning curve for everyone involved. 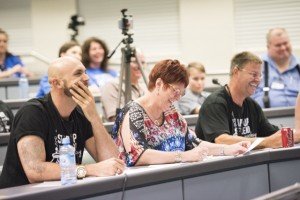 It really reminded me of the first couple of Perth Startup Weekends, where the community wasn’t really sure about how this all worked, and were really learning as we went along. The teams tended to focus on internal opinions rather than focusing externally – they would talk a lot amongst themselves, expressing their opinions and expecting the rest of the team to take that at face value. In the more mature Perth Startup Weekends we see the teams focussing more externally, talking to customers and bringing back validated information to the team, and also focussing more on actually getting things done and out there: the most obvious contrast with the Perth Startup Weekends is that only one of the teams managed to complete a working prototype, and only one team built a website (and that was in Wix), while in Perth we usually see 90% or more of the teams with a decent website and 60% or more with a working prototype or MVP.

With no-one really setting the pace of what was achievable the teams tended to be a bit incredulous of my stories of people getting New York Times coverage or Product Hunt listings, or thousands of Twitter followers, over the weekend. When I initially told them that teams elsewhere routinely managed to get paying customers by Sunday I strongly suspect that none of them really believed me. The cheers when the first team managed to land a customer on Saturday were gratifying (and I was relieved, I was dreading having to deal with none of the teams getting a sale!).

The final pitches went well, but again reflected the general lack of experience with the format. They did a good job, and the winning team managed to pull off a double-act successfully which is rare, but it was clear that none of the pitchers had done this before. I look forward to seeing how the community develops and how the pitches improve.

The event was a great success for the Startup Mackay community, not only because of the new startups that will form from the event, but also because it really drew the feldgling community together. There’s no co-working space or central hub for the community at the moment, but that was a conversation that was happening on Sunday, several people connecting to see how this could happen. The event will spawn a lot of new connections and conversations, and hopefully see the whole community move forward together.

As always, facilitating a Startup Weekend is a privilege that I am grateful to be able to enjoy, and being made so welcome into a community like Mackay was a gratifying and amazing experience. Good luck to all the teams with whatever they pursue next, and if we can help, let us know!. A special thanks to the organising team who really did well and made the event a great success.

Perth’s next Startup Weekend is on November 13th-15th, find out more information and get your tickets here