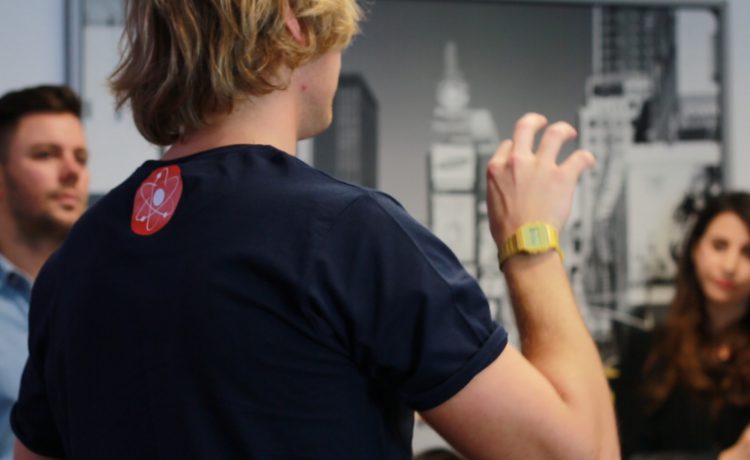 “And so; our nine heroic protagonists go forth into the world, with validated ideas, market opportunities, and a clear path to success ahead of them.”

To the casual observer it would be hard to believe that the eight startups we saw pitch on a sunny afternoon in June were the same eight startups that pitched to 14 angel investors at the Tech Hub on Wednesday.

In the space of 12 short weeks we’ve seen pivots galore and watched every single founder endure the ‘humps of iteration’ that plague all new startups at some point in the journey. The result is eight viable businesses who will all look for funding between now and Christmas to help them scale their initial product offerings.

The improvement over the three months is a huge testament to all of our guest speakers and mentors who came into the Tech Hub this winter. Without them it wouldn’t have been so easy for the Fusion Founders to climb back up out of the troughs of doubt that became less frequent, less deep, as we advanced through the program. We’ll have a full post on the best bits from all of our mentor’s sessions in the next couple of weeks!

From customer validation to marketing, and from being a brand ambassador to choosing scalable technology, we threw everything but the kitchen sink at the startups. It was impressive to see the dedication of our founders – somehow managing to keep up with their ever-increasing workloads while still being present in the Tech Hub in mind as well as body.

We also saw the value of being able to commit everything to a new venture. Several of our founders left jobs to pursue their startups full-time, and the corresponding spike in productivity and progress was obvious every time.

All of which brings us back to the grand finale of the Fusion Founder Program: Pitch Day! One by one, each startup had five minutes to pitch to the aforementioned room of angel investors, 14 in total, from a wide range of backgrounds, experience, and interest.

From my vantage point at the back of the room it was thoroughly encouraging to see the amount of nodding going on as each founder delivered polished and considered presentations. The questions that followed were tough, but well answered, and the standard of each pitch was well recognised by the audience.

“I was impressed by the thought and preparation that was put into the business planning and pitches. All the questions posed were handled confidently and well.”

Afterwards there was a flurry of business cards exchanged and pats on the back all round. We’re already hearing that a number of the startups have had followups from the investors, and there’s even talk of a couple of term-sheets in circulation, which is a fantastic outcome, and just reward for investable propositions.

The old adage that you can’t raise money for tech in Perth is well and truly out of date – and it’s so encouraging to see more and more interest and engagement in the startup scene from the WA investor community. What we’re seeing now is that if you present a well rounded and viable business to potential investors then you can raise money, and not just money, but smart money, from investors that can bring customers, introductions, and experience to your business.

For Atomic Sky, the end of the program is by no means the end of the journey, and we’re all looking forward to working with the Fusion Founders over the next weeks and months as they put the foot down and accelerate on Slack-esqe trajectories!