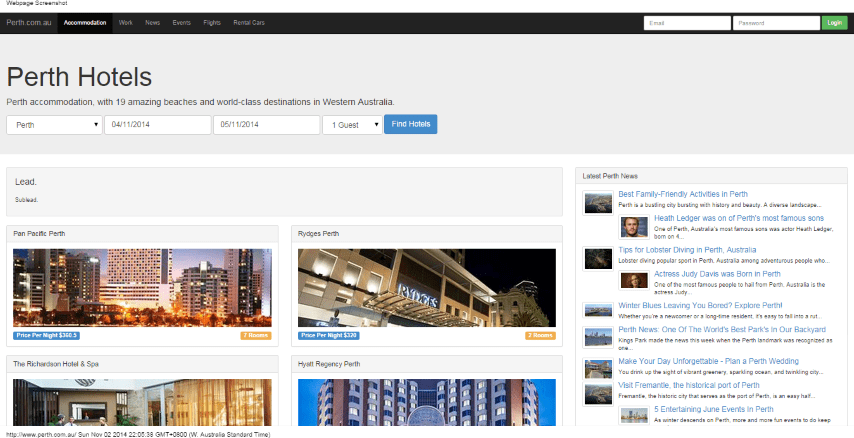 I read with interest and some amusement an article last Friday, it was a write-up about a website called Perth.com.au and the confusion it was causing.

Written by WATodays’ Brendan Foster and including quotes from Murdoch University computer security expert Nik Thompson and even our own esteemed City of Perth Lord Mayor Lisa Scaffidi, the article was a mix of not much at all.

Just so you don’t have to go there, I’ll give you a summary. To begin with, it seems that a “perth.com.au website blurs the lines between WA and Tasmania”. They were worried that holiday goers might think that Perth WA had shrunk in size and was now the capital of Tasmania, even pointing out that the capital of Tasmania was Hobart if we were geographically dyslexic. Interestingly, no one was actually quoted as having been affected by the website.

WAToday then talks about how confused they were by the tiny Tasmanian town of Perth, and their own WAToday offices, slipping in some jokes about lobster diving, fishermen, Heath Ledger and Judy Davis.

Now the article gets to the real meat, and shows how serious this business is, with the perth.com.au website being described variously as “unfortunate”, “domain squatting” and contact details being “worryingly” absent. To top all this off, the ‘apparent’ website owner had sinisterly not returned calls.

I would normally ignore an article like this, put it down to a bored journalist looking for something to make something out of. But I was a bit curious when I saw The City of Perth Mayor quoted, and a ‘Security Expert” called in, so I decided to find out who was behind the website and what their motives were. It might even be relevant to Perth startups.

So despite the apparent difficulty the original reporter had in contacting the website owner, a quick whois on the domain returned Hamish Palmer of Golden Dawn Investments Pty Ltd, and TractDNS. Another quick LinkedIn search returned Hamish Palmer, CEO of Tract, based in Launceston Tasmania. Could this be the fiend causing all the commotion?

I requested a LinkedIn connection with Hamish and he responded within minutes, I then sent him a message congratulating him on stirring up WAToday and could I get his take on the story. He responded quite quickly, and I am going to quote the relevant parts of his response.

“The short and curly of it is that Tract has invested in 11 geographic based domain names. Each domain is hooked up to a single codebase (hence the confusion in Perth/Hobart content), which I have slowly been chipping away at for the past year or so… we own domains like hobart.com.au, darwin.com.au, sunshinecoast.com.au, launceston.com.au, etc etc. “

“Like you mention, nothing groundbreaking, we are not motivated to sell or flip any of the domains, just develop location based services over time. The sites in their current, very unfinished, state are currently generating a small amount of income. This will increase when we move to finalise development and look at improving the UI and certain workflows. Hopefully over time we can create a bit of employment in each location and hire a few bloggers to write meaningful articles.”

“Probably best to take a look at hobart.com.au as that is what I am concentrating on and actually works, mostly. My next task here is the get the flights and rental cars working, at which point I will get the rest of the sites updated and get started on correct content. The timeframe on this is sometime in the next few years, basically as my time allows”

“Personally, I am a bit of everything really. I run Tract, which sees me do things like accounts, down to writing code, or helping clients with support requests. I got into website hosting in 2007, where I worked for a small telco and started my own hosting company in NZ (targeting WordPress and Joomla clients). The business experienced good levels of growth, and I made the leap to full self-employment at the start of 2010. I hate technical buzzwords, and put money into a swear jar whenever I say the word “cloud” out loud. “

So to me, this seems like a reasonable response, and not really worth bringing in dignitaries and security experts to comment. At most, it could have just been a plain cautionary story stating that perth.com.au doesn’t refer to Perth WA currently, and possibly to Hamish that he could hide or redirect that site temporarilty to something more accurate.

But, it did get me thinking about the modern startup process, where startups are encouraged to go live early, respond to feedback and iterate often. The above story is a likely prospect that a modern entrepreneur could face.

Is this a good or a bad thing? Does the bad publicity of an eager and sensationalist media equate to good publicity in the long run, or does misleading or confusing your random visitors cause you concern?

If you have any thoughts on the original story, my regurgitation of it, or any personal experiences of your own for better or worse, please tell us all in the comments below.