The OzAPP Awards are excited to announce the launch of their 2014/15 tech competition to identify the most innovative mobile, web and cloud app concepts in the Asia-Pacific region.

Initiated by Curtin University and Bill Tai, the OzAPP Awards was launched to stimulate an innovative business culture in Australia. It seeks to increase collaboration between entrepreneurs, researchers, ICT developers, investors and industry as well as provide a forum to network with world leaders in the field, including senior representatives from Google, Samsung, Twitter and Facebook.

The 2013/14 competition attracted almost 200 entries from all across the Asia Pacific with a dynamic team from Brisbane taking home 1st Prize.

Qualcomm Ventures is again supporting a USD $100,000 convertible note as 1st Prize of the competition, under the title: QPrize Australia. Qualcomm Ventures is an investment arm of Qualcomm Inc., a fortune 500 company with operations across the globe, which has sponsored the OzAPP Award for three years. This prize offers a unique opportunity to any tech startup from the Asia-Pacific region to gain exposure to a global marketplace.

Rackspace will also be offering the Top 20 finalists of the OzAPP Awards: $24,000 worth of hosting credits, marketing support and mentoring advice from industry professionals.

This year, Australia’s leading app development competition will travel on a Road Show with Bill Tai to the most influential and dynamic tech hubs in the Asia-Pacific region. The Road Show includes visits to Singapore and Hong Kong, further seeking out and unearthing the most innovative tech startups.

Bill Tai, a leading venture capitalist and regular startup investor in Australia will headline the OzAPP Awards Road Show from 13-17 October discussing the 2014/15 OzAPP Awards, technology trends and his most recent startup investments.

OzAPPs is also excited to announce a new category to encourage creativity and engagement with technology from a young age, with high school students this year being given the opportunity to enter their most unique ideas in the OzAPP Awards.

In another year of competition, the stakes are again raised as more and more startup enter to vie for 1st Prize.

“Applicants will be judged according to what the app offers, the market need for the product and its path to revenue,” said Mr Tai. “I look forward to seeing another great set of unique and innovative entries in the competition.”

OzAPP Awards Judge and Curtin University Director of IP and Commercialisation Rohan McDougall said five finalists would pitch their app concepts to the OzAPP Award’s audience and international judging panel to have the chance at winning significant cash, in-kind resources & mentoring advice to build and launch their app.

“The competition now has an international profile with a significant group of global entrepreneurs and investors attending the final event in Perth,” Mr McDougall said. 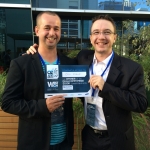 2013/14 OzAPP Awards winner, Hugh Geiger of Brisbane startup: Ollo Wearables recently caught up with the OzAPP Awards to update us on his team’s latest news.

“Winning the OzAPP Awards provided momentum at a critical time and helped our team be accepted into Techstars, a world leading accelerator program,” Mr Geiger said. Since taking out 1st Prize, Ollo Wearables went on to compete at Techstars and have started creating a strong presence in the US.