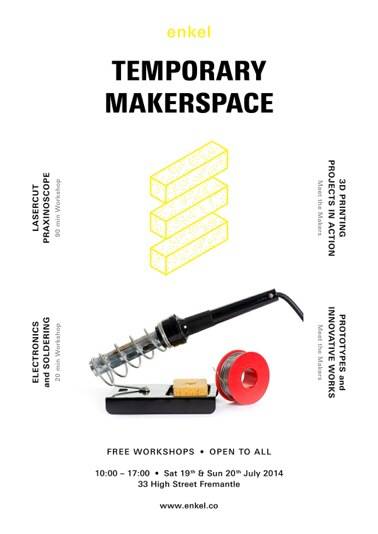 On the weekend 19-20 July Enkel will hold a temporary maker space in an empty former pizza shop in the centre of Fremantle.

The event is open to the public and will give visitors a taste of new technologies such as 3D printing, laser cutting and small-scale electronics.

…What we’re seeing here with the third industrial revolution is the combination of the two [technology and manufacturing]. It’s the computer meets manufacturing, and it’s at everybody’s desktop.”

The global maker movement and its flagship the 3D printer will have great impact on the manufacturing and retail industries, as well as self-sufficiency of local communities.

We in the Enkel collective are currently working to build a maker space (which will be housed together with a coworking space, studios, learning facilities and the Enkel restaurant in our new venue in 2015). This event is held to raise publicity for Enkel and give the people of Fremantle a taste of the maker movement.

In the empty former pizza shop at 33 High street in Fremantle.

Who is it for?

This event is for anyone interested in understanding more about new technologies, the maker movement and Enkel.

Enkel is a transdisciplinary collective of people who work together to explore new possibilities and narratives for Western Australia. Our main focus in 2014 is to create a space, where we can experiment with new ways of working, learning, making, eating & drinking. A space which continuously develops, and which is designed for people to accelerate each others’ learning journeys.

For all the details and to keep up to date, visit the Enkel website.