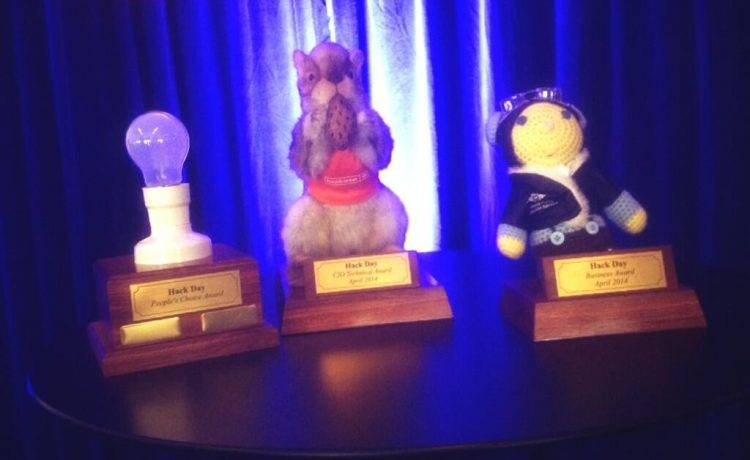 I got invited to the Bankwest Hack Day because I organised some stuff. Which in itself is pretty unique. How many large corporates do you know that invite random people who’ve organised events to come watch them have fun and make things? There were even other guests from other similar organisations there to share learning about running internal Hack Days. So my mind was open to the awesome before we even began.

Before attending the Hack Day, I went to Bankwest to be shown around and briefed. Richard McAllister, Agile Practice Manager, did the briefing and took me through the company’s recent adoption of Agile practices. Which was impressive, as implementing Agile development on that kind of scale over that many teams with no prior history isn’t easy. They seem to have got it working; the evidence of post-it note feature descriptions stuck to walls was all over the IT department levels. The Agile practice worked well with the “Activity Based Working” concept; everyone gets a laptop and a locker, there are no assigned desks or workspaces, and everyone gets to choose where they work each day. You can see ad-hoc workgroups forming, especially during the Hack Day where teams were formed from people who don’t normally work together. 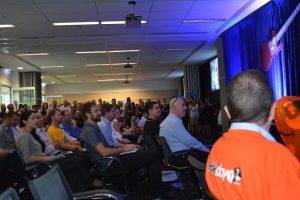 Rikki Billing organised the Hack Day I attended. I have no idea what she does the rest of the time, but to be honest that seemed to be a full-time job in itself. The program starts weeks before the actual event, with employees contributing ideas for suitable hacks to the Hack Day website. Each hack is then vetted, duplicates are combined, really simple useful ones are weeded out and added to the production backlogs. At the end of this process there is a list of business and process improvements that could be done in a day, each with at least one person prepared to pitch it to the assembled masses.

The assembled masses on Hack Day itself were mostly made up of IT staff, but there was a contingent from every other department, and Rikki explained that while it started as an IT department thing, the rest of the company was getting more into it and the whole idea was getting more popular.

“Hack To The Future”

Part of the popularity was surely that the whole Hack Day was themed, with a “Hack to the Future” theme for this event, and every aspect of the day that could be given an 80’s cult movie twist, was. Trivia games on the films interspersed the pitches, the MC’s were dressed as Marty and Doc, the whole nine yards. It really set the tone for the day; this is a fun event despite being of serious purpose. Of course, the pitches themselves got a bit serious, but even then it was clear that the best way to attract a team was to show that it was going to be fun.

As an outsider, the pitches varied from the obvious to the arcane. I’m under NDA so I can’t talk about the actual ideas themselves, but there were some things that even I was saying to myself “really, that doesn’t happen already?”. Others were devious changes to processes that would shave hours off the time an internal team spent on the process. Others were really solid ideas for improving customer-facing processes and increasing transparency. All in all, the usual mixed bag of technical debt that any organisation builds over time and small incremental innovations that only occur to people actually dealing with a process every day. But there was enough variety so that everyone attending could find a team that they could contribute to. 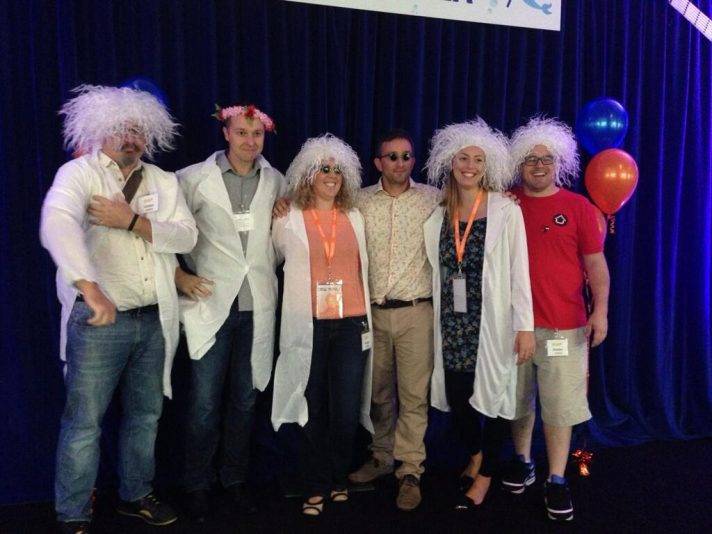 The teams formed incredibly quickly by Startup Weekend standards. I was shocked and did some checking to see how this worked. I learned that the ideas had been up on the website for a while and that most attendees had already been recruited to a team. Just as well, because they only had 24 hours to do their thing, no time to waste trying to find that elusive designer.

The teams vanished off to find a home for themselves immediately. Most teams were made up of a majority of IT staff and seemed to find a home in the IT levels, but some spread further afield and others split up to address different aspects of their problem.

The teams had very little time to work on each problem, but then they didn’t need to produce a fully-working solution (and no Lean Canvases to fill in or potential customers to find and interview!). The object of the exercise was to determine if the problem could be solved, and outline a solution. A working demo was good, and something that was ready for testing and could actually go into production was the Holy Grail of the day. There was at least one team that achieved this, led by a lady from Retail who’d never done a Hack Day before and was visibly glowing with pride at the end. 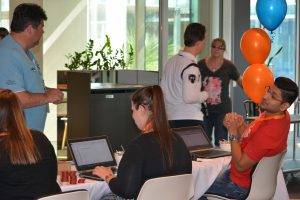 The results were presented by market-stall, with each team decorating a table in the main hall with the results of their efforts and drawing attention by the usual means of bribery, exhibitionism, charisma and shouting. Two awards were selected by appointed judges, but one was a popular vote from any employee, and they turned out in droves to see the results. Each voter was given three voting chips to spread between the teams as they saw fit and so the place was a bedlam of competing teams showing off their solutions and trying to get votes. It felt very much like a marketplace, with teams shouting their ‘wares’ from their stalls and trying to attract as much attention as they could.

The awards at the end were split into three sections: one from the IT dept, one from the Business (all the other departments), and one from the employees. Teams could win awards or honorable mentions from more than one category, so while there were only 3 prizes, there were 10 “awards” spread over 7 teams. Notably the People’s Choice awards were more diverse than the judged awards, evidence of superior bribery or different priorities?

As an outsider, I was left with a couple of impressions: first, that Bankwest appears to be a good employer, one that listens to its employees and gives them a say in the business. And second, that even after all this time, they’re still optimising their execution. From a startup business perspective it just really emphasises how product development never stops and how you can go really, really far with an un-optimised execution.