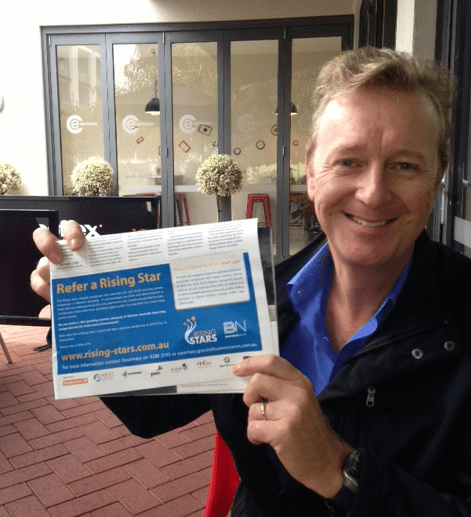 Unless you are running your startup on a generous, departed family member’s inheritance, you most likely are pretty strapped for cash and knowing which baskets to place your eggs in can be an educated gamble. Of course there are valuable events and programmes out there but for every one there seem to be a dozen charlatans willing to take your money in exchange for magic beans.

I myself have been sucked in a few times by trying to improve and develop and am these days quite skeptical about anyone charging to ‘assist me’ as most of the growth I have in my success has come from my own discovery and plain old hard work. However, sometimes an opportunity comes up that a little voice inside you begs not to pass up, I believe this is one of them. The WA Business News annual ‘Rising Star’ awards have a new addition this year.

The awards are an overdue event as far as this writer is concerned and it only solidifies the opinion that our local world is beginning to take our beloved startup scene seriously, and not a moment too soon. 😉

Previously, I think it’s fair to say that the WABN has primarily been focussed on the Mining and big business sectors but have now realised that our innovation space, particularly the tech side is too valuable to ignore.

You know a secret? This would not have taken place without each and every one of YOU. All your efforts in collaborating, burning that midnight oil, not taking no for an answer and regenerating, rather than flailing when an idea doesn’t pan out has given a voice to our community and you should all be proud of yourselves.

We are not quite out of the woods yet though, yes we have their attention and support but this is only the beginning. We need to bombard them with our brilliance, stand tall, speak loud and represent.

YOU HAVE THE STAGE, NOW SHAKE WHAT YOUR MAMMA GAVE YOU!!

Do not shy away now that the spotlight is upon us, this is what we have been working to achieve and the moment of glory is on the 25th of June 2014.

The awards will select the finest entries and whittle them down through the process of evaluation by Perth’s Angel Investors, Capital Investors and the industry leaders in our business communities. Throughout this process you will have opportunities to build relationships with people that would otherwise prove problematic at best to get next to. To gain an idea, have a look at the statistics on who read the Business News to see who you will be rubbing shoulders with.

There can only be one winner but I can’t imagine anyone losing out of their involvement in the awards. You will gain an understanding from the best in the business about how sustainable your startup is, credibility among the key businesses and individuals in WA, publicity via WABN that would otherwise be well out of your startup budget scope. Naturally, the winner will get a fabulous trophy and limitless recognition and promotions.

Still having trouble parting with the dosh? Well, you have a chat to your accountant but I believe that most of you could claim this as a business expense and then there is this….

I met with Charlie Gunningham, the GM of Digital Media at WABN, a good friend and a pillar of our Perth startup scene this morning and he told me a little story that won me over and with his permission I shall share it with you.

Charlie Gunningham: “I was genuinely flabbergasted. I’d never felt like that before or since, and now, 14 years later, it brings to mind all those fake awards night acceptance speeches where the humbled actors/actresses do their best to express surprise for their win. What do you mean surprise? You were in the final 5, and perhaps the bookie’s favourite! You fraud! Those that don’t win express in time honoured tones their thankfulness for being nominated (“it’s such an honour“). Gimme strength!

And yet it happened to me. May 2000. Our little startup was 5 months old and barely surviving. My cofounder’s father had passed away and so he was in France. Our team was somehow getting through the days, but I seriously wondered how many months, or weeks, we could last. It was two months after the dotcom bubble had burst. We had revenues appearing, but in far smaller numbers than had been on our first spreadsheets we’d used to plan the business a year earlier.

In this, perhaps our toughest moment, something sparked me to enter the grand sounding Asia-Pacific IT & T Awards (WA), in the ‘Best eCommerce’ category. The awards night followed a 2-day trade show including a pitch presentation to the judges at our stand. Frankly, I was amazed to even be in the company of those that had also made it to the final 5. Really. We were up against major government web sites developed with millions by fancy pansy web design firms, and adultshop.com, a listed business which had TV ads and bucket loads of money. On the night of the Awards, we were seated with our fellow competitors, and as it came around to our category, the announcer said, “And the winner is a…“. At that instant, the lady from adultshop.com took her acceptance speech out of her clutch bag expecting it to be her moment. At the time, I thought the same to be honest. Yet the word “…aussiehome.com” came out over the hotel speakers.

My gob was smacked. I turned to my wife, amazed, got to my feet in a daze and shuffled up to the stage. I think I remember dedicating the win to Nick who had to be in France, and everyone who had belief in the company, shareholders and staff and thanked the judges. The rest of the night was a blur.

I still have that award in my study ~ I am glancing at it now as I type. It was to be the first of a few such awards over the years, which gave us all some confidence, press and credibility as we built up the business. If we’d not won that first one, we may not have entered many others. We survived that tough year in 2000, and by mid 2001 were truly up on our feet. Rather than a few months of life, we had 10 years ahead of us, and even now, 4 years after selling the business, aussiehome.com still exists as a site, with all the reiwa.com listings on it. Its back-end system still powers 100′s of real estate and related websites. It lives on.”

Charlie is proof that ‘It can be done’ and if he had never entered into the awards, would he still have made it through the rain? No-one will really know but I am certain that the encouragement and opportunities it generated was well worth the money. No wonder Charlie felt the need to implement this category into the Rising Star Awards, on behalf of our community thanks a bunch, we’ll make you proud.

To find out more on the awards: http://www.rising-stars.com.au/about-the-awards/
And for more on Charlie: http://charliegunningham.com/