Home News PhDo Or Do Not… There Is No Try. Interview With Sam Birmingham.
Facebook
Twitter
Linkedin
Email 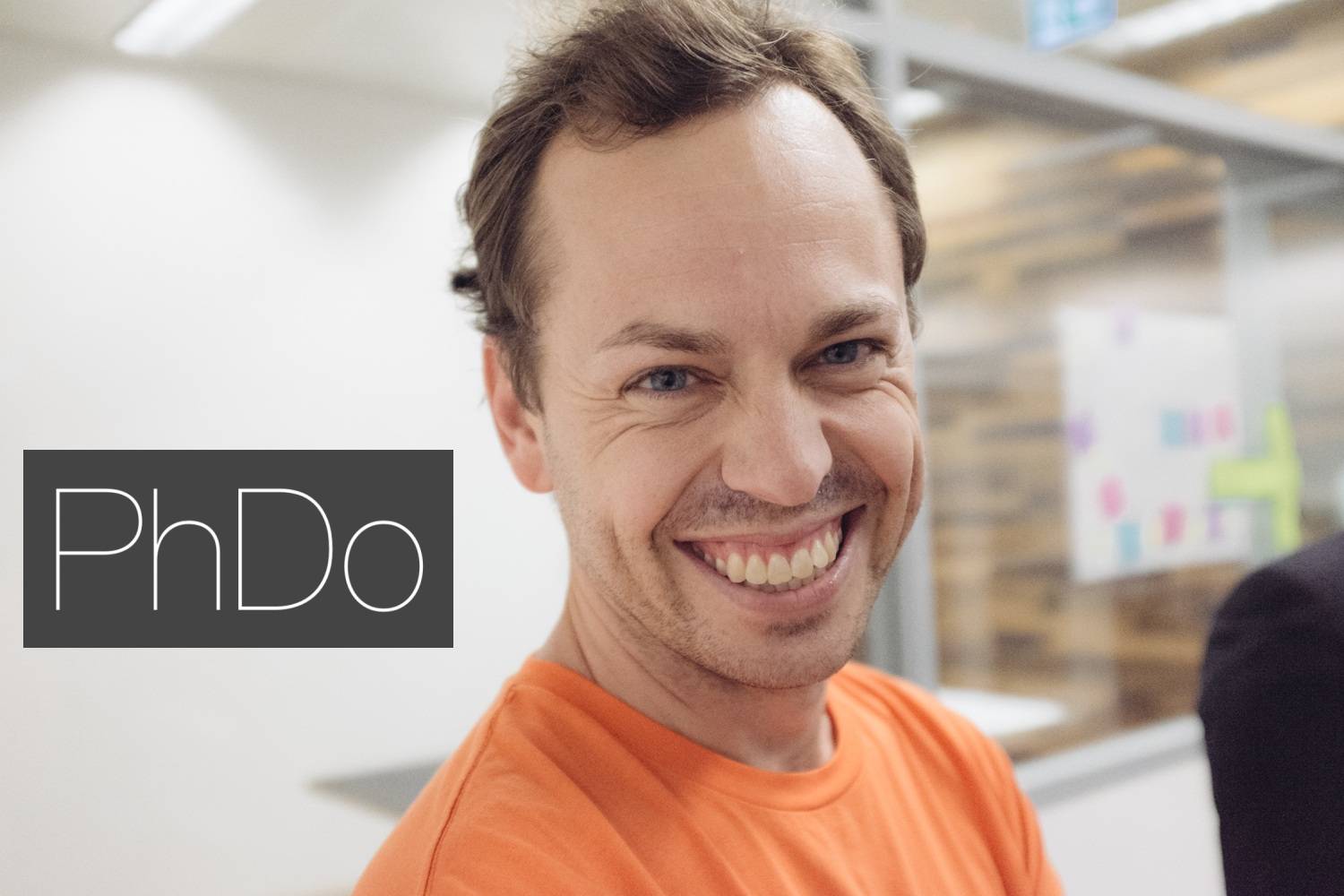 Recently our favourite Startup community leader, Sam Birmingham, ran an interesting six-week event called PhDo. Called the “Philosophy of Doing”, the course got startup founders along twice a week to motivate them to actually do something with their project. I caught up with Sam last week to get the details:

MH: What was the intention or purpose behind PhDo?

SB: I think we’ve got a gap at the moment; there’s a lot of fires being lit under people at Startup Weekend and similar events, but then there’s a gap and not enough of those projects actually continue to plug along. So my theory was that maybe people just need a little bit of structure. It doesn’t need to be crazy new skills or massive insights, just some structure and accountability. Obviously the guidance is still important, but probably just as important is the simple fact that we’ve had 15-20 people setting aside 2-3 hours twice a week for six weeks, plus homework. This means that each of those people have probably been spending 10 hours a week on their project, while without the accountability they may have spent a lot less on it. When you multiply that by six weeks it means they’ve made some progress on these things rather than continuing to wax and wane as is too often the case with the Startup Weekend projects.

MH: So was your theory vindicated?

SB: Yes definitely. A few validation points I can offer is putting up the payments gateway halfway through and almost everyone sticking with it, and those that didn’t stick with it weren’t because they had to pay, but because of other commitments. I’m now getting emails from people, not only participants in this course, but also other people in Perth asking when the next course is. So it feels like it was useful based on the word of mouth. And the feedback from people at each session; we sometimes do updates with ‘what have you done/doing/doing next?’ and you can see people moving things from the ‘do next’ column to the ‘doing’ column to the ‘done’ column.

MH: You’ve been responsible for a few events in the space. When you start something like this, do you just do it or do you get feedback first?

SB: I got some feedback from some people, but I think I know the Startup Weekend market pretty well. Really it’s just a case of getting out there and doing it. I think it went from an articulated thought bubble with a hacked-together website to the first class in the space of about ten days. I knew I hadn’t given it any marketing time, so the freemium model allowed people to join up in the first couple of weeks if there hadn’t been enough time for the word to get to them. But in hindsight I think we hit the maximum numbers I’d be comfortable with for a thing like this.

MH: How many people did you have?

SB: I think we had 25 or so people come through it at any point. There might have been a bit more than that in the first session which was just an info session. But in terms of classroom size, that’s a school classroom, and trying to do stuff that’s higher touch than just a lecturer up the front, to be honest I couldn’t have fit that many more people into it.

MH: What did you learn from this? Anything you’d do differently next time?

SB: So the things that don’t work as well are when we have one individual speaking and then multiply that by 25 times, for example the pitch night. It’s great for that one person, it’s good to have each person delivering their pitch, they get maximum impact for the 2 minutes they’re pitching and the 3 minutes they’re getting grilled, which means everyone gets five minutes of really intensive return. But the rest of the time, while they get some ideas and creativity from watching other people’s pitches, it’s not direct. Whereas I think most participants have got more value out of the times that we’ve broken into groups and done pretty intensive sessions with 3-4 people talking about something instead. So at times we’ve probably got too caught in the one-to-many model. The tough part about that is when you realise after 5 people that this isn’t working as well as you’d hoped; is it fair to then cut the next 10 off, or do you push on through?

MH: What was your answer?

SB: Generally we’ve pushed on. If it’s dragged on a bit then I’ve tried cutting the last few to get it through. One of the things that’s helped a bit is having a break halfway through, so we never get stuck on an exercise for more than an hour. That’s one of the good learnings I think: after about the third week I asked what the best and worst of PhDo was, and some participants said that it loses a bit of momentum after the break, and others said it would be great if they could bring their own food or somehow not leave during the break. So since then I’ve started catering, so as part of the ticket people got their food included. Now everyone’s all got a reason to stick around, we start seeing some good conversations happening during that period now, without it being an intensive thing. You still get a break and switch off, you still do an hour block of work with a break and then an hour block of work, but we’re actually seeing some good productivity in that middle half hour.

MH: Is the networking and people bouncing ideas off each other part of the success?

SB: Definitely the bouncing ideas off each other, that’s been the biggest highlight of the last week or two; seeing some of the feedback from some participants, where they’re now throwing some really good curve-balls to their peers. We’re just moving into the story-telling and pitching side if it, and some of the best one-liners and slogans have actually been a peer coming up with ‘what about this’ and saying something absolutely classic off the cuff, and I’ve just gone ‘that’s awesome, write that down now’.

MH: Are you planning on doing more PhDo programs?

SB: Yes, I have to, I promised someone in a tweet last night. Yes, but I suspect the format might change. I’m already thinking if six weeks is the right format, maybe it should be a bit longer. Ultimately this was a bit of a pilot to see if we had the depth of talent and the appetite for an accelerator, if there are enough people who are willing to go a bit further than just come to a weekend event. It has given me more confidence with that, to be honest, as the program has unfolded. Of the 15-20 participants, two-thirds I knew well from things before, they’ve attended Startup Weekend or whatever. The others are new to the community which is really good. Some of the participants have some really well-developed ideas, if I had the resources and accelerator model supporting the program, they’re definitely projects that I’d want to approach the founders and say “hey, I think this is for you. You should quit your job now, we’ve got the resources to back you, so you’re not jumping out of the plane without a parachute, but what you’re working on is pretty cool”.

MH: Which brings me to: Startup Weekend, PhDo, Founder’s Institute, all overlapping a bit…

SB: yeah, if I had to choose an analogy then PhDo is Primary School to FI’s High School…

MH: … so what’s next on the curriculum? What do your graduates go on to do?

SB: Which is going to be the interesting thing, because I think the participants are expecting a certificate at the end of the course, and they’re not going to get one, because it’s not over; they need to continue doing stuff as part of the course. What we’ve been trying to drill into them all is that we’ve given them this structure, and now they need to keep doing it. So it’ll be interesting to see to what extent people keep doing that off their own bat versus me imposing the structure on them. But I’d like to think for all of these things to bring them together we do need a proper accelerator program with the traditional model and the resources to back it.

MH: That’s always been the problem; you’ve got the idea, you’ve validated the market, you’re ready for investment, you just need a basic investment to give up your job…

SB:.. and the kick in the arse to actually quit your job. Maybe the new year is the right time for that kind of thing, as people tend to do sillier things in the new year. We all know there’s enough projects around, the question is if there’s enough in the pipeline for an accelerator to have a third or fourth cohort in a year or so’s time. If we keep seeing the startup community expanding at grassroots level then maybe. It did grow pretty spectacularly quickly off the back of Spacecubed, plus Startup Weekend and all the meetups and everything else. I’m not sure it’s still growing as quickly, because we’re now getting to a size that we see some of the bottlenecks kick in. An accelerator hopefully gets rid of some of the bottlenecks, but can we keep producing enough talent and ideas and recycling the people who don’t necessarily work from one try back in again? That’ll be the question mark, but I think we’ve definitely got the talent and also the support to run a few of these ideas. Hopefully you get a success or two out of that, which will bring new people into it, and that’s probably the next big challenge for Perth; getting those successes and that feedback loop of success reinvesting in the community.

Thanks Sam for your time, energy and enthusiasm!

If you’re interested in PhDo, head over to the site at: http://www.phdo.com.au/
Founder’s Institute will be recruiting in the new year, see: http://fi.co/ for details
Startup Weekend runs regularly, check out http://perth.startupweekend.org/