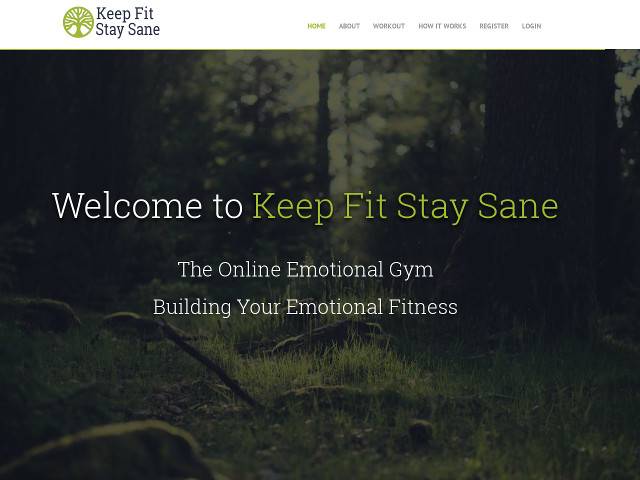 Keep Fit Stay Sane was a startup looking at mental/emotional health and fitness, with the aim of preventing depression/anxiety disorders through the concept of “emotional fitness”.

I first pitched Keep Fit Stay Sane at the 2nd Perth Startup Weekend (March 2013). I had practiced the 1-minute pitch over and over again and had it down perfect, right up until I actually went up on stage, forgot everything and dribbled some crap at the audience. Needless to say I didn’t get a team formed around it, but it stuck in my head as a good idea. The original idea was to create a “gym for depression”, an online site that implemented a few of the psych things I’d learned during my depression, because there wasn’t (and still isn’t) anything out there on the interwebs that actually helps with depression.

Around October 2013 I decided that I should just do this on my own. Within a couple of weeks I had a basic site engine together in Go – it handled logins and templates and storing stuff on the database and everything. Of course, the actual HTML it served looked like crap because I’m a colour-blind code monkey and can’t design for toffee 😉 By January I’d got a slightly better version together with some basic functionality in place, and I officially launched it on January 30th by putting the code live and sending out a link to my friends & family on Facebook (yes, that was it).

My sister qualified as a counselor around this time, and she helped out a lot with advice on the psych aspects, and I had a volunteer, David Perich, who helped out with the marketing plan (more on that later). Around this time I got more involved with //Startup News, and that example of real growth provided a real contrast to the anemic increase in interest I was seeing. I figured part of the problem is that there’s a huge stigma around mental health and although everyone thought it was a great idea, it was a great idea for someone else, not them. Classic startup fail indicator number 1. So I pivoted the pitch slightly to “emotional fitness” and the need for everyone to maintain a level of emotional fitness, which seemed to go over better. I went through Sam Birmingham’s excellent Pollenizer workshop and refined the pitch down to something people responded to and “got” quickly.

But taking people through the site showed I still knew nothing about design, and while people got the idea the actual site made no sense to them and looked ugly. Finally around June, Patrick Green finally talked some sense into me and got me to implement a ready-made theme, which worked brilliantly. I applied for the NEIS program to get some basic revenue going while I pushed through, and started getting the actual functionality into shape now I had the landing page sorted (yes, six months in and I’ve just got the landing page sorted!). Around this time I hit the Trough of Despond; realising how much work was involved and how little I knew. Tough times. Then I really hit the wall trying to get the basic site functionality working. After pitching this to the Silicon Beach crowd one night, Marcus Tan really drove this home to me; without a working exercise I really didn’t have a product, and without a product all the rest was just useless scenery. I’d assumed the functionality would be the easy bit, but actually it was really hard.

Around this time my research  showed  that while people got the idea behind emotional fitness once they’d had it explained to them, it was still something that they thought other people needed, not them. And people kept telling me that Employee Assistance Programs (EAPs) really sucked hard and the concepts behind Keep Fit Stay Sane could be applied to that to make a really nice B2B product… if I could get the interface working.

I redoubled my efforts to create a decent interface, but just found that more and more I not only couldn’t actually get something that worked, but didn’t want to deal with it. My focus moved more to //Startup News (at this point only six months old and getting 10K page views!) and I found myself talking about Keep Fit Stay Sane but not actually doing anything with it. This was my indicator that actually I wasn’t interested in creating a B2B EAP enterprise product, and that the project was actually dead and I’d better dispose of it before it stank the place up. 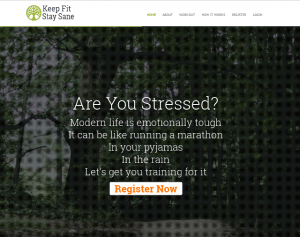 What I learned from this attempt:

What I’ll do different next time:

What I’m going to do now:

Shuttering Keep Fit Stay Sane is hard, because this was my baby, and I’ve really invested a lot in it. But at the same time there’s a huge sense of relief that I won’t have to keep banging my head on this brick wall and can finally move on to something else.

Startup Post-Mortems are an irregular feature on //Startup News. Let us know if you’ve recently shuttered a project and want to share what you learned.

Why manufacturing is important for economic recovery